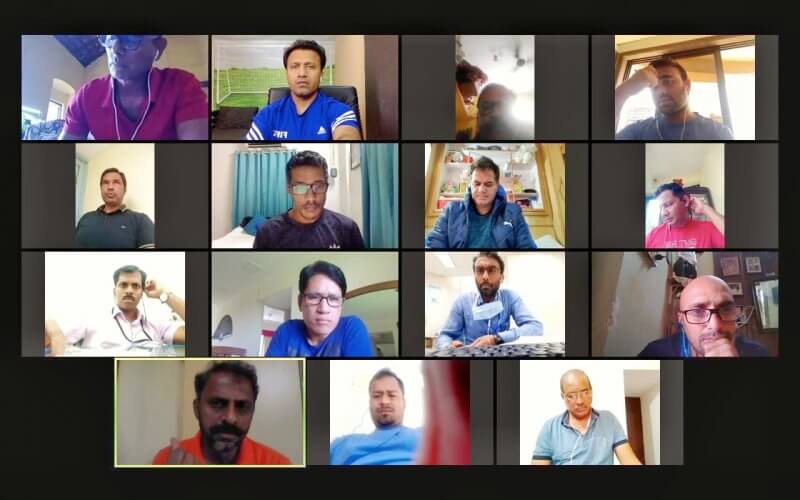 NEW DELHI: In an effort to reflect on the methodologies applied in its coaching courses and chart out further improvements, All India Football Federation has conducted three online seminars even as India stays locked down in wake of Covid19 pandemic.

14 instructors from all over the country attended the online seminars conducted by AIFF Head of Coach Education Savio Madeira on April 1, 3 and 8, with the next one scheduled for April 16.

“It’s do difficult to be away from the game. But at the same time the period serves us an opportunity to introspect on what we are doing. We need to find creative solutions, and keep in touch with coaches,” Madeira told the-aiff.com.

“We at AIFF understand the power of the digital world. Technology can connect you with anybody in any corner of the world. Hence, we preferred to walk the path to chalk our plans and working together to bring about radical changes to the Coach Education system in India,” he continued.

The group concentrated on the nitty-gritties of the G License Certificate (the precursor to Goalkeeping course), AIFF D License, and AIFF C License, and formed separate committees to look after, and improving the respective courses.

Former Indian National Team Assistant Coach Mariano Dias, who had also won the I-League title as the Head Coach at Churchill Brothers in the 2012-13 season is a part of the Committee. “The online sessions have really helped us put on our thinking caps and discuss how we could improve the theory and technical aspects of our coaching modules,” Mariano stated.

“The planning of training sessions is an important aspect. We have been able to come up with some creative ways to hold such sessions as well.”

Former Indian Women’s Team head coach Sajid Dhar is a part of the committee for  the AIFF D License, and believes that the online sessions have helped the instructors exchange ideas and discuss modifications.

“At this point of the time when the world is going through a crisis, the sole medium by which we can get connected with other coaches is via video conferencing. We as instructors need to be in regular touch with each other especially with Head of Coach Education Mr Savio Medeira in order to keep ourselves updated, and also share some ideas what best we can do to educate our coaches,” Sajid Dar said. “There has been active participation from all the coaches, and the knowledge sharing on the platform was been totally worth the effort. In fact, I have also conducted a few sessions for coaches in Kashmir.”' We just found out that the new Texas fake ID was released by Topfakeid.com - The vendor has an excellent Texas fake driver's license. read more: https://topfakeid.com