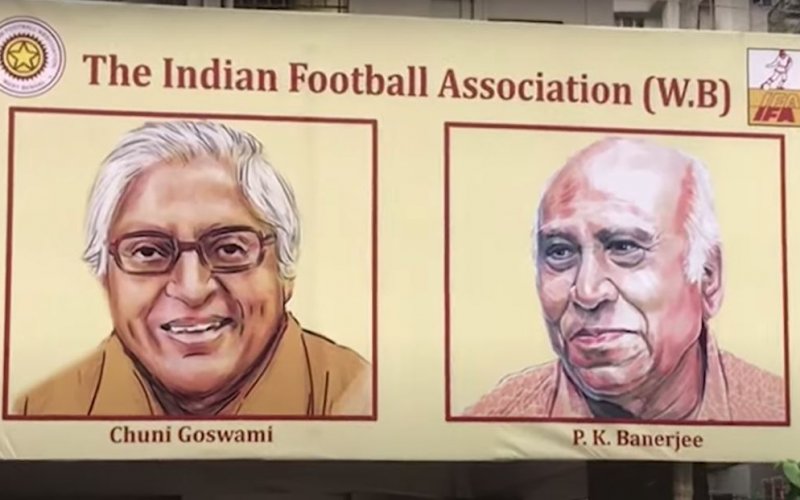 KOLKATA: The 2020 Durga Puja has been of a subdued manner with the streets no more playing hosts to throngs of crowds in the City of Joy.

However, while the people of West Bengal celebrate the festivities from the safe confines of their homes, the football governing body of the state has taken it upon itself to reach out to the masses.

Outside two of the more popular Durga Puja shamianas – in Ahiritola and Chetla – one could see (from afar), giant arched gateways proclaiming the love of football that the state has shown for more than a century, through IFA (Indian Football Association) banners.

Beside these arches, lies another hoarding that commemorates two of the greatest footballers that the country has produced in its history – Chuni Goswami and PK Banerjee.

“Football itself is a festival here in Bengal. So it is apt that we move along with the festive season here and celebrate it all together,” said IFA General Secretary Mr. Joydeep Mukherjee said.

It is not just at these two venues that the state federation has attempted to take football forward together with the masses. Indeed, such banners, or hoardings have come up in different areas across the city.

An IFA hoarding is visible at a busy crossing in Chandi Chownk, a board commemorating former India captain Sailen Manna reminds the people of the glorious past of Indian football, when the late defender led India to gold at the 1951 Asian Games, and also wore the captain’s armband in the 1952 Olympics.

Apart from Kolkata, a banner or hoarding each has also come up in each of the 23 districts in West Bengal.

“At IFA, we believe that we are the pride of the people of Bengal, and we want to reach out to them and relate to them. Naturally, a lot of football lovers kept their eyes on the Puja Mandaps,” said Mr. Mukherjee. “We want to relate with them, and try and bring that much more smile to their faces when they see football-related banners. This is not just for the Pujas, but we also intend to have these banners everywhere throughout the year as well. It is our dream to have the IFA brand all over the state.”

Earlier this month, the IFA had played host to the Hero I-League Qualifiers, the first ever sporting event in the country post the lockdown, and is all geared up to host the Hero I-League 2020-21 later in the current football season.