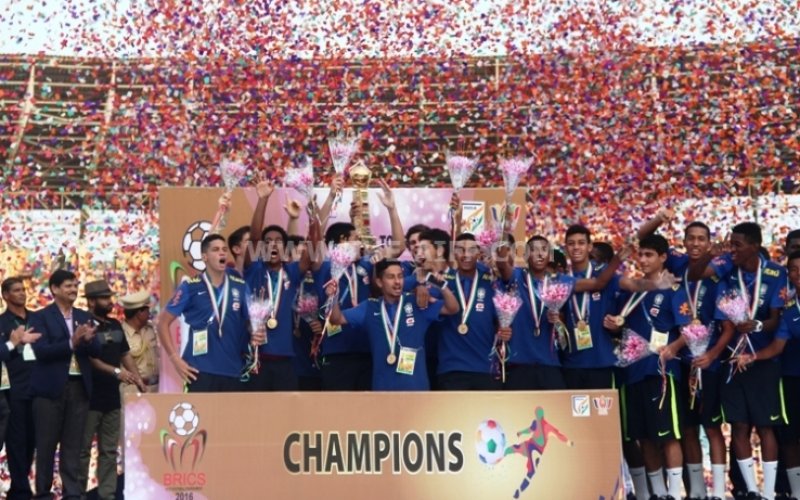 GOA: Brazil were crowned Champions of the inaugural edition of the BRICS U-17 Football Tournament as the ‘Samba Boys’ thumped South Africa 5-1 in the Finals at the Jawaharlal Nehru Stadium in Fatorda, Goa today (October 15, 2016) to lift the trophy.

A brace by skipper Victor Oliveira and a goal a piece by Paulo Filho, Vinicius Oliveira and Alan de Souza for Brazil, on a hot afternoon in Goa proved to be enough as Carlos Amadeu’s boys wrapped up the proceedings, proving to be superior against their opponents infront of a jam-packed stadia.

The ‘Samba Boys’ were right off the blocks and as early as the 2nd minute the danger bells rang for the ‘Amajimbos’, as Marcos Santos’s rasping shot flew inches wide of the South African goal.

After suffering a near setback, the ‘Amajimbos’ found their legs in the match as time passed and in the 20th minute Karata rattled the woodwork as his shot from close range kissed the woodwork and came back into play.

South Africa’s resurgence was short-lived and four minutes later, Brazil took the lead as Paulo Filho outfoxed his marking defender and cleverly found the back of the net.

The Brazilian attacking class proved too much to handle for the Amajimbos and in the 35th minute Vinicius Oliveira’s screamer from 30yards crashed into the back of the net to double Brazil’s lead.

In the 40th minute Brazil were awarded a penalty and skipper Victor Oliveira placed it exquisitely into the left bottom corner to make it 3-0 for Brazil.

South Africa were reduced to 10 men right after the second half kicked-off as Mazibuko was red-carded for a dangerous lunge, leaving the ‘Amajimbos’ a man down for the remainder of the half.

The ‘Samba boys’ tried to take full advantage of an extra man and upped their ante. In the 52nd minute, Paulo Fliho came close to extending Brazil’s lead as his lob from outside of the box, struck the woodwork.

Eight minutes later, skipper Vitcor Oliveira doubled his goal scoring tally and slotted the ball home as he capitalized on a cross from the right flank to give Brazil and unassailable 4-0 lead.

Brazil dominated possession and even after the Amajimbos pulled a goal back in the 89th minute through Bophela, Carlos Amadeu’s boys found the net in the added extra time through Alan de Souza as the full-time read 5-1.

Meanwhile, Russia finished third in the Tournament after they came from a goal down to defeat China 2-1 in the 3rd/4th placing match earlier in the day, courtesy of strikes from Kirill Kolesnichenko and Chelidze Georgy in the 66th and 84th minute respectively, after China had taken the lead through a Tao Qianglong penalty in the 34th minute.