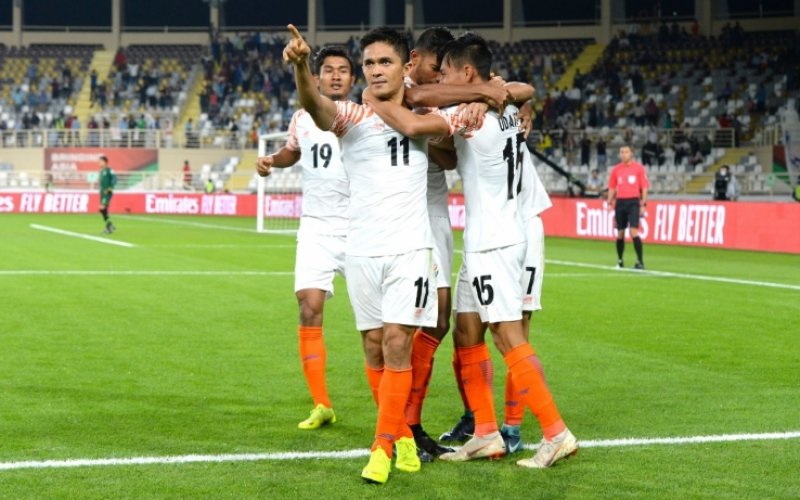 ABU DHABI: Back in the AFC Asian Cup after an eight-year wait, the Blue Tigers kicked-off their campaign in Asia’ elite footballing tournament in >

A brace from talismanic striker Sunil Chhetri and a goal each from Anirudh Thapa and a sublime finish by Jeje Lalpekhlua rounded India’s first victory in the Asian Cup since 1964.

The superb performance in the second half sealed it for India. Some tacky play in the attacking third, non-stop pressing and some no-nonsense defending stayed the highlights.

With the pairing of Sandesh Jhingan and Anas commanding the backline, the Blue Tigers' defensive compactness in the early minutes proved to be stubborn.

India closed down quicker in the midfield, not allowing their players time on the ball. It only provided the time for the likes of Ashique Kuruniyan and Anirudh Thapa to dictate play in an attacking stance. And although Thailand dominated possession, India had the better of the chances and showed bright signs around the opponent’s 18-yard box.

Ashique Kuruniyan’s pace and tackiness down the left wing gave India an opportunity to score as early as the 3rd minute, but his cross, flashed in front of goal, with no Indian bodies able to make contact.

India surged into the lead in the 27th minute. A quick throw-in by Sunil Chhetri on the left flank released Ashique on the flanks and the latter burst through the Thai defence to earn a penalty kick, courtesy a handball by Thailand’s’ Theerathon. Chhetri, as composed as ever, converted from the spot.

But the Tigers could not hold to the lead for long. In the 33rd minute, Thailand equalized after Teerasil Dangda’s header crashed into the Indian net from a free-kick.

Changing over, India regained their lead, a brilliant strike from Chhetri doing the trick for them. Chhetri banged it in from the top box off an Ashique back-heel after Udanta Singh’s run had done the damage.

Chhetri almost scored his hat-trick in the 63rd minute when Thailand’s goalkeeper Bootprom muffed a cross from Udanta, only an onrushing Chhetri’s effort was saved for a corner.

By then it was all India in the midfield. The combination for the third one in the 68th minute was a marvel to watch. Following an exquisite defence-splitting pass from Chhetri, Udanta teed-off Anirudh Thapa in the box for the latter to chip into the net over two helpless Thai defenders and the goalkeeper.

Substitute Jeje’s strike in the 80th minute sealed the fate for India. He received it from Halicharan on the top of the box, turned in a flash and placed it with the edge of his boot.

India next play face hosts UAE in their second match of the tournament on January 10.