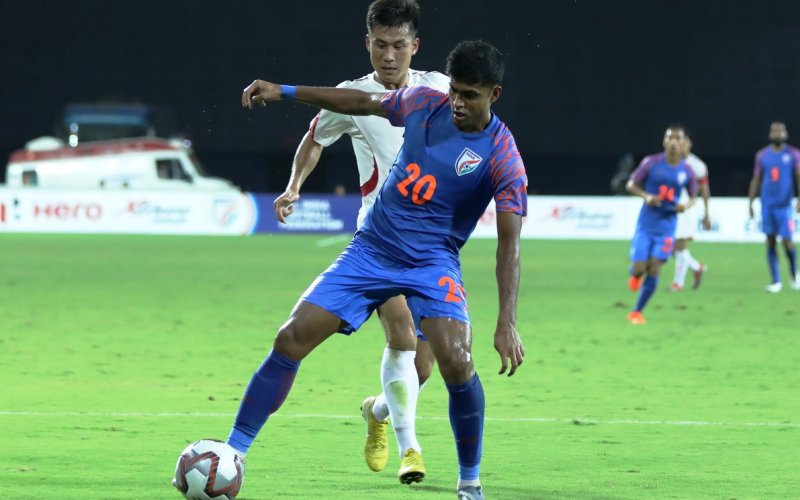 NEW DELHI: All superheroes don't wear capes. Amongst us, there are personalities who, in one way or other, serve mankind silently -- away from all sorts of the showbiz.

Such is the story of Pritam Kotal, the Blue Samaritan who proudly wears the Tricolour on his heart. The 26-year-old defender who has seen struggles from close quarters wishes "no one faces the hardship" as he did.

"I faced hardship during my childhood. I wish no one faces the same. That's the reason behind my tiny efforts to lend a hand towards them who needs an extra bit of push. We were fortunate enough to get support from our seniors. If we don't give it back to them who need it, then honestly, we don't deserve to be here where we are today," an emotional Kotal narrated in a live session with AIFF TV.

He endured the struggle and it helped him build himself block by block to wherever he's today. He recalled how his parents struggled during his childhood to make both ends meet. He didn't mince his words to thank his parents who have supported him throughout for this social cause.

🗣️ @KotalPritam: I don't want anybody to face the hard days that I've seen in my younger days. I want to give back to society. Don't know how long I'll be able to, but I will keep contributing as long as I am able 🙌#BackTheBlue 💙 #BlueTigers 🐯 #IndianFootball ⚽ pic.twitter.com/LQhmcI0Fqq

"I didn't have boots, jerseys, balls. I had to look for others' help. But my parents used to bear the brunt and safeguard me always. It's like everything in football - and life. You need to look, you need to think, you need to move, you need to find space, you need to help others. It's very simple in the end," Kotal continued.

"Owing to my schedule and different commitments, I can hardly stay at my home. But, whoever feels hungry, needs help, doesn't think twice to come to our home. My mom finds solace in feeding them. It's like our collective effort to giving back to society. Our door stays open for 24 hours for anyone and everyone."

Pritam, who has already played 36 matches for the Blue Tigers, has come up with a Football Academy, along with a few other current players. He fears malnutrition might dent our future generation, and that's the primary reason for him stressing on the importance of nutritious food besides proper training.

"I have seen boys not getting proper food pre, and post-training. Even after training, they take meagre rations which are not enough for a budding footballer. It is going to be our loss, Indian Football's loss. Proper food besides training is the need of the hour for them. One day, when they mature enough, they'll handhold their juniors. This is a cyclic process to run the show seamlessly," the 26-year-old defender stressed.

Meanwhile, he elaborated that his gymnasium also stays open for them whoever wants to break an extra sweat to stay fitter. Even Kotal's parents don't think twice before letting them in to use it even when he's not around -- a bond of trust encapsulated perfectly.

"During the lockdown, I could realise the utility of my personal gymnasium. But, probably it's the first instance when I used it for so many days at a stretch. Generally, the local boys who can't afford to pay the fees of a professional gym don't hesitate to use mine. It's not just mine, it's for everyone."

"It hardly matters whether I'm around or not. They come and use it. Since my U-19 days in Goa, I craved to have my own gymnasium. I feel I need to share it with them who also needs it big time.”