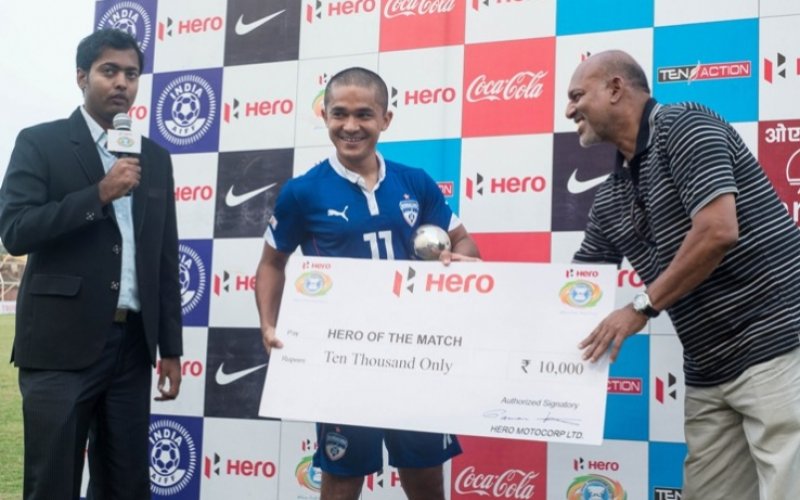 VASCO: Bengaluru FC rode Captain Sunil Chhetri’s heroics to become the team to qualify for the semifinals of the 36th Hero Federation Cup by edging Pune FC 2-1 in a Group B tie here at the Tilak Maidan on Monday (January 5, 2015).

The Arjuna Awardee broke the deadlock with an acrobatic volley two minutes from halftime and doubled the tally from the spot in first-half injury time to help the I-League champions go into the break with their heads held high.

There was late drama though as Pune halved the deficit courtesy Thongkhosiem Haokip who somehow got enough on the ball after a high ball was not collected neatly by BFC custodian Laithuammanwia Ralte.

Chhetri is now the topscorer in the tournament with four goals to his name from the same number of outings. The all time leading Indian goal getter now has eight Federation Cup goals in total.

Coming to his club, the Blues of India finish their group engagements with 10 points in their kitty and will now wait for their last-four opponent from Group A. Pune FC (4) on the other hand will now take on Salgaocar (6) in a virtual quarterfinal clash.

The first half meandered through only to spring into the life in the last few minutes. Captain Chhetri once again underlined why he is the face of football in the country with an overhead kick that will surely be reckoned among the goals of the tournament when it concludes on January 11.

The ball bobbled into the four-time AIFF Player of the Year’s path from Eugenson Lyngdoh’s corner. Chhetri showed excellent technique to rifle it in with an overhead kick leaving India U-22 keeper Amrinder Singh in Pune goal with no chance whatsoever.

Moments later Sean Rooney was brought down by Amrinder trying to smother the Australian’s attempt. The referee pointed towards the spot and Sunil made no mistake tucking it low into the bottom right corner with the keeper guessing right.

The goal catapulted the India Captain (4) to the top of the goalscoring charts with Tolgay Ozbey, Douhou Pierre and Jackichand Singh all tied at three on second.

Coach Karim Bencherifa ringed in the changes after the break to reverse their fortunes. Mathew Golsalves was taken off for the more adventurous Munmum Lugun at right-back at halftime while Anthony D’Souza – already among goals –replaced Ryuji Sueoka at the hour mark.

Nikhim Kadam also took the place of Lal Ramluaha but all the Red Lizards could muster was missed chances. Haokip, came close to halving the margin twice in the 64th and 69th minute, both times finding keeper Laithuammanwia Ralte in the right position to thwart his attempts.

At the other end Robin Singh showed great will to brave his cut on the forehead to cutback for substitute Beikhokhei Beingaichho – who replaced hero of the match Sunil Chhetri – who fed Rooney but the Aussie’s header went straight to Amrinder.

Brazilian defender Luciano Sobroba took a swipe from distance but his shot dipped just over the crosspiece and onto the roof of the net.

Haokip though finally got his reward for the efforts in the half, getting just enough on a high ball which the keeper failed to collect neatly after a Nikhil Kadam drive ballooned up and high.