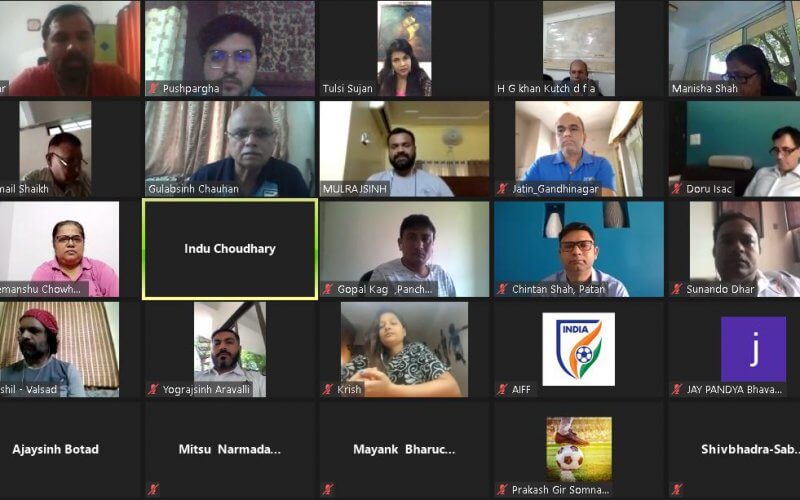 The sessions conducted over the four-day period consisted of interactions and lectures on grassroots football, coaches education, AIFF youth leagues, Golden Baby Leagues, academy accreditation, futsal and the Hero IWL. The sessions conducted primarily involved explaining the State FA members the significance of each vertical to modern Indian Football scenarios and contexts. It also heavily stressed on the contribution of the State FA towards each of these verticals.

Gulab Chauhan, Honorary Secretary GSFA, stated, "I thank AIFF for conducting the online sessions for all GSFA members. All the participants came out of the sessions knowledgeable and happy with the steps taken by AIFF for Football development. They also proposed their ideas for AIFF to consider for further development of football in the state."

Isac Doru, Technical Director, AIFF mentioned, "We have got a very useful, interactive and comprehensive webinar with our football development partners, covering a lot of topics: Coaching Education, Grassroots, Academy Accreditation, Club Licensing, Golden Baby Leagues, Women's League etc. I am pleased to see all the interactions and am very happy with all the inquiries regarding women's football activities. Gujarat State Football Association has been showing a lot of interest in football development.

"I hope that they will continue to be very proactive and hopefully, in the years to come, we will see a lot of football players for the National Team. The Football Academies in the State should play a huge role and take the necessary leadership to improve the competition and performance and only then football will become a career based profession that could inspire all young Indians".

Sunando Dhar, C.E.O League Department, AIFF stated, "We at AIFF are all happy to listen and help the State Associations in our endeavour to take Indian Football forward. These sessions are just the beginning towards a more robust approach taken by AIFF as far as state communication and football development are concerned."

Savio Medeira, Director of Coach Education, AIFF quipped, "Great initiative from GSFA to get all their members together on one platform to understand the workings of the AIFF. Hope this meeting will make the relationship between the parent body and the state stronger to take the game to a different level. the AIFF will always be there to provide all support in their endeavours."

The AIFF intends to continue such online sessions with all prospective states where the exchange of ideas and information will help the concerned stakeholders be in the knowhow of not only Indian football but also globally.