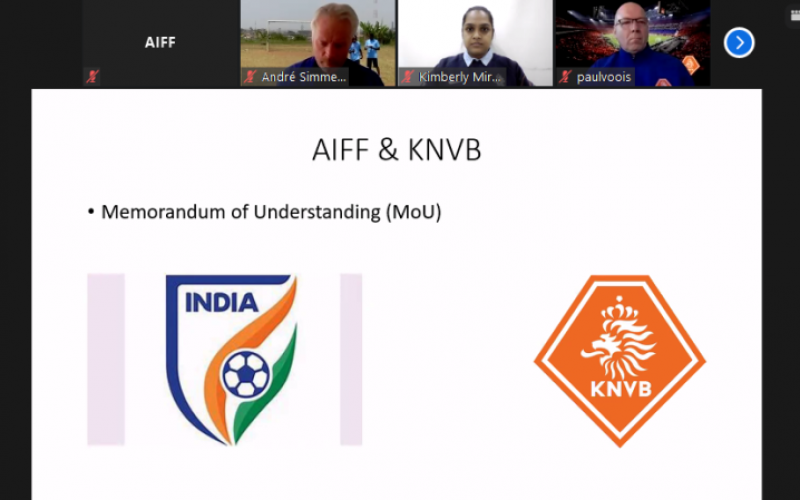 NEW DELHI: The All India Football Federation (AIFF) and Royal Dutch Football Association (KNVB) joined hands to organise a four-session online coaching course for women coaches as part of the Memorandum of Understanding (MoU) between the two federations.

27 AFC A, B & AFC/AIFF C category women coaches have been selected for this course which kicked off on Friday (November 20, 2020), followed by the second session being held on Monday (November 23, 2020).

Mr. Bert Zuurman, the lead instructor for the course, felt the level of interaction kept growing during the sessions.

"It is always difficult to interact with the participants during an online session but that's the best possible option under current circumstances. I feel the content was clear to the coaches. I must say that the interaction improved continuously during the sessions," Zuurman explained.

Amoolya Kamal, an AFC C-certified coach, mentioned, "It was a great session where three useful topics were discussed -- Ingredients of football, Structure of Football and Decision-making. We were asked to share our thoughts and give suggestions on each topic. It was more like a Q&A round which made the session more interactive and educative."

She also thanked the federation and AIFF Head of Coach Education Mr. Savio Medeira for organising the sessions and mentioned that she would be glad to participate in more sessions like this.

"The knowledge was shared to us in a simpler way that can be understood even by non-licensed coaches. At this challenging time of the pandemic, I am happy that time is utilized in a way that has helped me to acquire more knowledge. I would like to thank Savio-sir for organizing such a webinar and helping women coaches to develop," the former India Women's National Team midfielder and current Bangalore United FC skipper added.

"I learnt a lot from this session, especially how to plan a session and make it interesting so that the players can understand easily. We also learnt a lot about the structure of the team and its functions, each one's responsibility, quick decision-making and transparency and communication between the coach and players."

Bert Zuurman concluded, "They (participants) have to feel free to share their opinion(s). It is the best way to learn mutually."

The participants are as follows: