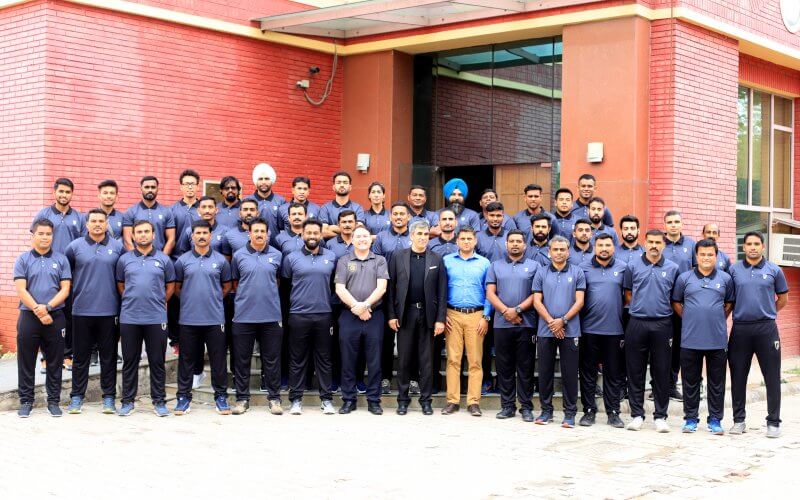 NEW DELHI: The All India Football Federation (AIFF), in collaboration with the International Professional Scouting Organisation (IPSO), put together a scouting course for 40 coaches and scouts from all over the country, at the Football House, in New Delhi.

The course got underway on Saturday, March 7, 2020, and is set to take place till Tuesday, March 10, 2020, and was attended by AIFF Technical Director Isac Doru and Head of Scouting Vikram Nanivadekar.

This was the second time that the AIFF organised a scouting course in India this year, and is being attended by as many as 40 candidates, with the likes of former Senior Men’s National Team players like Hardeep Saini and Nallappan Mohanraj.

AIFF Technical Director Isac Doru said to the-aiff.com, “We have had a lot of people that have applied, but we could only select the 40 best candidates. The education is very important for India to create the specialists who can understand the individual level of the player, at their specific ages, positions and playing styles.”

Head of Scouting Vikram Nanivadekar believes that broad-basing the scientific scouting techniques across the country will only help build a stronger “pyramid”, from which the selection for the National Teams would be done.

“It will help coaches who are working in different schools, academies, clubs from the U-8s and onwards to crystalise their thoughts and they can implement what they have learnt here in a systematic manner at their own clubs, and according to the philosophy of their coaches,” Nanivadekar said.

“Once this process spreads across the country, it will help the national team, as we will have a strong pyramid, and the options become more, for both men’s and women’s teams,” he opined.

AIFF Head of Coach Education Savio Madeira feels that the implementation of scouting methodology could help create a better network across the country.

"In India, we have had a coaching structure for quite some time now. However, coaches also need the support of good scouts to spot and then groom the players that they require to build their team," he said. "This course will help impart the scouting methodology that can aid in spotting the attributes of players across all age groups."

Instructing the course in the theoretical, the practical and the interactive sessions with the 40 candidates, was IPSO Director Colin Chambers.

“This is a Level 1 course, but it’s a very important step for these guys to take. Most of them are coaches at their respective clubs, but in order to be a scout, you need to look at the game in a different manner than how a coach would look at it,” Chambers mentioned.

“A scout can help a football club in getting players so that the club doesn’t have to go out and spend money. They can get young lads and iron out the rough edges through their coaching. That’s the starting point,” he further said.

Former India international and current AIFF Development Officer for the state of Punjab, Hardeep Saini, who also holds an AFC B coaching license, believes that the course has given him a new perspective in terms of scouting players.

“When I was just playing, I felt that since I have played professional football, I can grasp all the coaching points easily. However, there was a big difference,” said Saini. “Similarly, I came with the assumption that coaching and scouting points would also be similar. But here, I have learnt that there is a whole new manner of thinking in scouting, something you never really think as a player or as a coach.”

After the theory session on the initial day, the 40 attendees will also be taken to AIFF’s Youth League Games for their practical sessions.