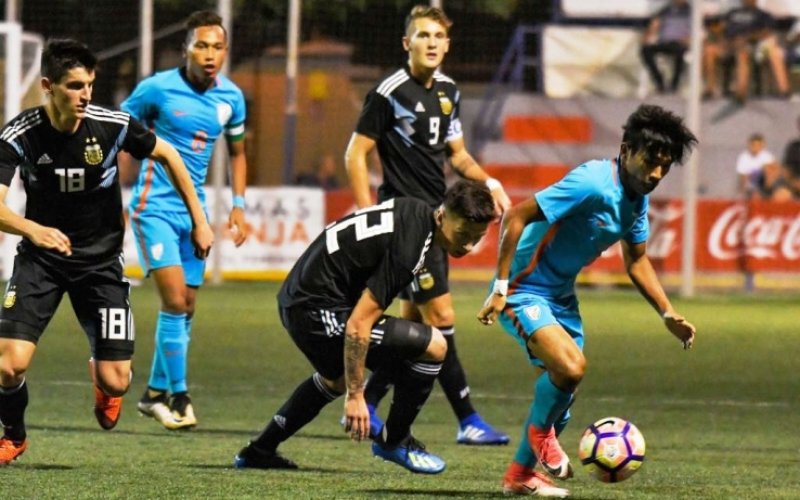 NEW DELHI: A 10-man India U-20 defeated powerhouses Argentina U-20 2-1 in what Coach Floyd Pinto describes as one of the “biggest days for Indian Football” in the U-20 COTIF Cup in Spain. 8 boys who represented India in the FIFA U-17 World Cup started the day for India with the rest all being from AIFF’s developmental team Indian Arrows.

Goals from Deepak Tangri (4th), and a divine free-kick from Anwar Ali (68th) along with some determined pressing, defending and astute passing helped India register the upset victory against Argentina U-20 who have won 6 FIFA U-20 World Cups over the years. For the record, this is the second time the two sides met – the first time being in the 3rd Nehru Cup in Calcutta in 1984 when India lost 0-1.

The Argentina U-20 is being coached by 2006 World Cupper Lionel Scaloni while Argentine great Pablo Aimar has also accompanied the team as the Technical Director of the side.
Post-match, in an exclusive interview, Floyd took us back to the match describing the goals, the strategy, the perseverance, the movement and much more. EXCERPTS:

The victory against Argentina was achieved with 10-men.

Yeah, we were reduced to 10 after Aniket Yadav was flashed the red card.
To play 40 minutes against Argentina with 10 men, double our lead and hold on to the lead to eventually win, needed every ounce of character and vocal support, both on and off the field.

The one thing missing from our continued development through this tournament were goals. I am really happy the boys adapted so quickly and effectively to the changes we made post our first gamer. I just couldn’t have asked for a better reaction.

How did the bench react?

The bench was understandably ecstatic yet calm as there was a lot of football yet to be played. Deepak Tangri’s goal was one of a sheer determination while Anwar Ali’s free-kick was of the highest order. We wanted to put in a performance that would make people forget about our previous game against Venezuela U-20 and the boys managed to do that.

After the loss against Mauritania U-20, how did this turnaround happen?

The loss provoked us to rethink the way we played against high calibre opponents. To achieve first a draw against current U-20 FIFA World Cup runners-up Venezuela and now beat Argentina goes to show the immense work put in to restructure the organization of the team & the flawless execution by the players in both games. The win today has given me the belief that with the right support we are moving in the right direction.

Do you feel this victory will change the outer world' view towards Indian Football?

This victory will definitely earn Indian Football more respect in the World of Football. It opens up a window of opportunity to test ourselves against the best in the World on a regular basis.

I also need to highlight the U-16 boys winning against current U-16 Asian Champions Iraq on the same day. Both the victories are proof that this bunch of young U-16 and U-20 players are undergoing a systematic planning and exposure with the right kind of matches which is required for their continuous development.

A win against Argentina -- was it anywhere in your bucket list when you started your coaching career?

It’s unbelievable! I am a very proud Indian today.  This win is a testament to the efforts and belief of the All India Football Federation in moving forward towards developing the youth of the Country.  I would like to the General Secretary Mr. Kushal Das and Abhishek for their continued support throughout our preparation along with SAI. This is a victory for the coaching, administrative, the media staff and all the fans. We have a renewed belief that with the right support & exposure we are capable to compete with the best teams in the World.