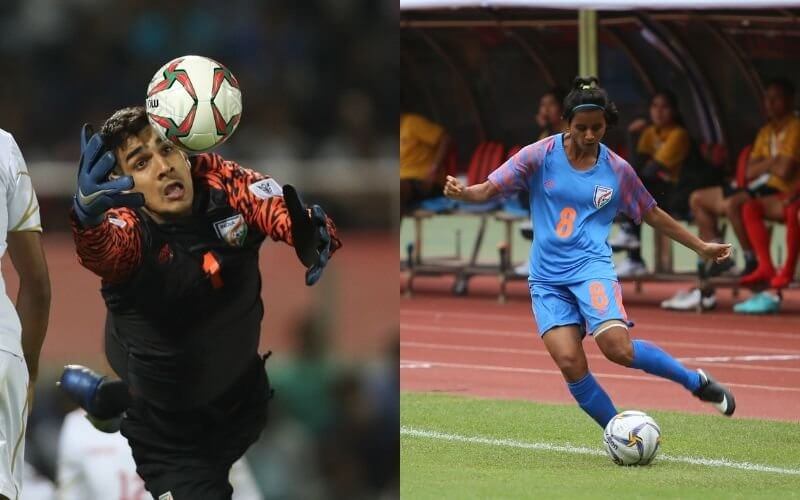 This is the first time Gurpreet has received this prestigious award, and in the process he became the second goalkeeper after Subrata Paul in 2009 to be named the AIFF Player of the Year. The Blue Tigers custodian was elected as the winner on the basis of votes from Hero Indian Super League and Hero I-League club coaches.

“There was always a desire to reach this point and this is an Award which I have always looked up to. Chhetri-bhai (Sunil Chhetri) has won it so many times and I have always thought when I can be worthy enough to win it,” Gurpreet said. “Huge thanks go to AIFF and everyone who has supported and helped me relentlessly to help me achieve this today” he added. “Garnering the all-important draw against Asian Champions Qatar in Doha, eleven clean sheets in last Hero Indian Super League edition, winning the Golden Glove award could not have been possible without the team.”

“A big thank you to all Hero Indian Super League and Hero I-League club coaches who have thought I'm worthy of receiving this award. I'll try my best to live up to the expectations,” he expressed.

The 28-year-old had also received the Arjuna Award last year.

Meanwhile, National Women’s team midfielder Sanju was selected the winner for an excellent season; while Ratanbala Devi was the winner of the 2019-20 Emerging Women’s Footballer of the Year Award. Both the winners were selected by Women’s National Team Head Coach Maymol Rocky in consultation with AIFF Technical Director Isac Doru.

Sanju said, "Personally, it's a big milestone for me. This Award is the proof that all the hard work that we have been doing over the last few years has indeed paid off. I would like to thank AIFF for all the exposure that we have got to grow and to improve ourselves. I'd also like to thank the seniors in our team. All of them have been an immense help to me and have helped me cope with the rigours of international football. I'd also like to thank Maymol ma'am for allowing me the time and the opportunity to grow within the team and express myself on the pitch.”

Ratanbala, who has been a key fixture in the heart of the Indian Women's Team midfield, said, "This is a happy moment in my life, indeed. I've seen some of my teammates bag this award in the previous years, and it is really nice to win it myself this time round. The way our team has grown over the last couple of years is simply phenomenal. I would like to thank the AIFF, my coaches and all my teammates for helping we win this award. This will provide further motivation for us to push ahead in the future."

Furthermore, Men’s National team midfielder Anirudh Thapa was the AIFF 2019-20 Men’s Emerging Footballer of the Year. He was also selected the winner on the basis of votes from Hero Indian Super League and Hero I-League club coaches.

“This news is a breath of fresh air for me and my family -- especially whatever we have witnessed so far in this year. I would like to thank AIFF, all my teammates and coaching staff to help me achieve whatever I could. We have garnered some fantastic performances at the club front as well as for the National team last year but we need to push harder to raise the bar and we can surely do that,” Thapa quipped. “That fact that I was voted by coaches from the clubs makes this all the more special.”

“I extend my heartiest congratulations to all the winners. We are really proud of them. They are surely an inspiration for the entire football fraternity in India," AIFF President Mr. Praful Patel averred.

Women Football We need to break the taboo, have comfortable conve...