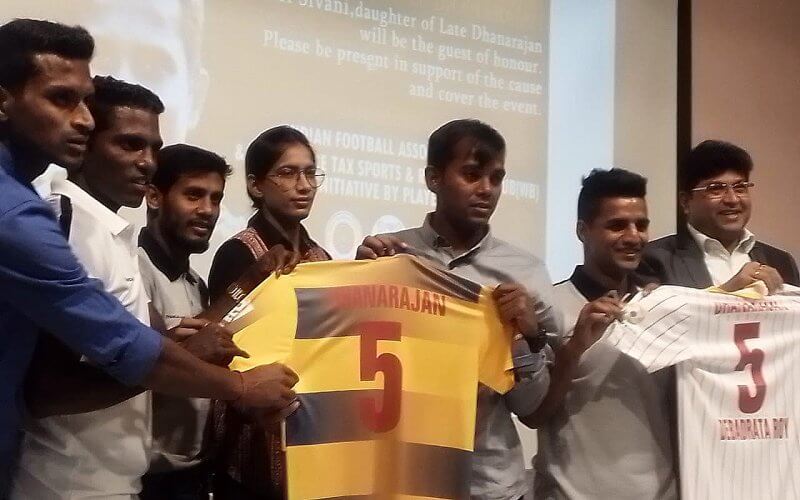 Dhanarajan, a former Mohun Bagan, East Bengal and Mohammedan Sporting professional died of a sudden cardiac arrest on December 29, 2019 while playing in an All India Sevens tournament at Perinthalmanna in Malappuram district of Kerala.

The match is slated to kick-off at 2 PM IST. The entire gate revenue will be handed over to Dhanarajan's family.

"Obviously, we can't get Dhanarajan back to his family. But, this is what we can do from our end. He played in the Kolkata Maidan for long and the football-loving crowd of Bengal will never forget him. It's the time to show your support for him, for football," former India captain Arnab Mondal stated on the sidelines of an event in Kolkata, where the charity match was officially announced.

In an event where all the aforementioned players were present, Jaydeep Mukherjee, Hony. President, IFA unveiled the two team jerseys for the charity match.

"It's a joint venture by the Indian Football Association, Income Tax Recreation Club and Players Forum. Dhanarajan had also represented Bengal in Santosh Trophy. It's our responsibility to stand by his family in this tough period. The entire ticket sales as well as the sponsored amount, whatever we can put together, will be forwarded to his family," Mukherjee informed.

"It's a small step which we can take. It's a collaborative effort which would, probably, help his family to some extent. One of our fellow players was affected by cancer and we tried to help him as well. It's our moral responsibility and we look forward to lending a hand to anyone whoever needs it," midfielder Mehtab Hossain opined.

Normal tickets will be priced INR 50/- and there will be a special 'guest card' worth of INR 500/- which will be available at the Mohammedan Sporting ground, IFA office from Thursday (February 13, 2020).

In order to reach out to more fans, IFA have plans to put more outlets over the next few days.