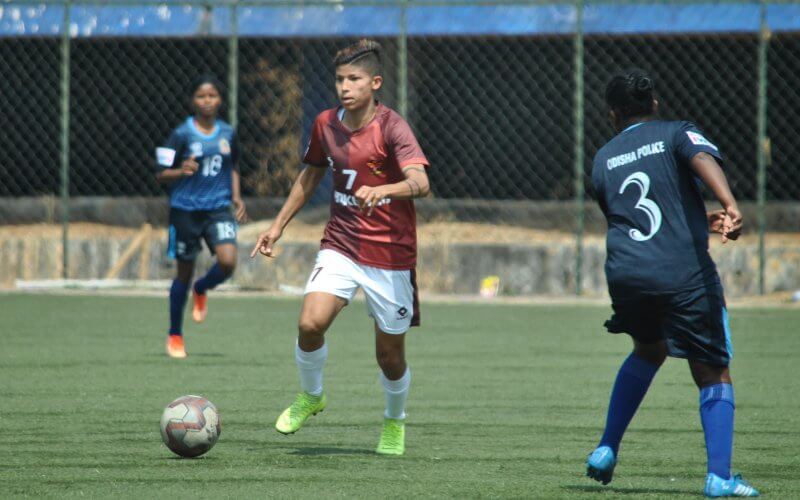 Bengaluru, February 1, 2020: Gokulam Kerala registered yet another resounding victory, this time by an astounding margin of 7-0 over Odisha Police at the Bangalore Football Stadium on Saturday. Sabitra Bhandari’s five-goal haul made all the headlines, with Agbo Esperence and Grace Lalhauhnar also joining the fray with two late goals.

The two halves were quite contrasting in nature. While the first was quite closely contested, the second was one-way traffic. Sabitra Bhandari opened the scoring in the seventh minute, with a volley from the edge of the box which left the keeper with no chance.

Odisha Police were still in the game going into half-time but the second half erupted like a volcano. Bhandari made it 2-0 in the 52nd minute after chasing down a loose clearance and heading it past the onrushing Odisha Police keeper Tikina Samal.

The Nepal international completed her hat-trick just a minute later through a brilliant solo effort, going past three defenders and slotting it home.

With the match ball in her bag, Bhandari wasn’t done yet. She added her fourth in the 74th minute by converting a seemingly speculative cross and a fifth one by rounding off the keeper. There was a shout for offside, but the flag stayed down.

Bhandari was replaced by Agbo Esperence in the 86th minute, to a huge round of applause. The substitute, who hails from Ivory Coast, made it 6-0 in the 90th minute, rounding off a wonderful solo effort. The seventh goal came from Grace Hauhnar in stoppage time as the match drew to a close.