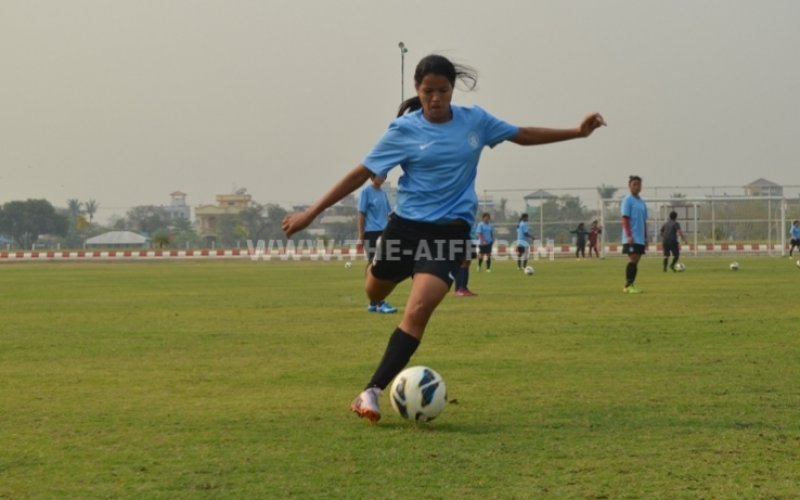 JABALPUR: Flinty and bold, fused with a little bit of jovialness and rowdiness, not only in the zone of life but on the field of Football too, can be aptly used to describe one of the longest serving members of the Indian Women’s National Team, Sasmita Malik.

Her sheer extrovert behavior, which screams of self-confidence, beating the odds and hardwork, is perhaps what makes her such a resolute character and a pillar of inspiration. Albeit daring, her mesmeric skills and the way she glides with the ball makes her imbibe a standout persona, which one might say is an embodiment of the way she has lived her life so far, with courage and sheer determination.

Born on April 10, 1989 in a small village of Odisha, Sasmita was always a strong-willed girl with an attitude to face things head-on, with a penchant of tackling problems with a bit of craftiness and a lot of creativity.

“I used to wriggle out to play almost everyday. My mother used to scold me that I might get sick, but that never really bothered me. I always found ways to dupe her into believing that I was in home, studying or doing chores”, recalls a nostalgic Sasmita.

“It was all about sports at that time. But slowly I realized that I needed something substantial to channelize all my energy into. And that came in the form of Football”

If you ask Sasmita about love at first sight, she’ll jump and scream “Yes”, because that is what Football was and probably is to her.

“It was love at first sight. I went with my father to watch Football in the local Stadiums and the sight of girls playing ball, mesmerized me. And I decided that one day I will be like them, I will play Football”

Flirting with Football, Sasmita started her baby-steps towards stardom and put in the hardwork to go the distance. A trait which has intensified with time.

“I was in love with a ball. I used to take it with me almost every place I went. It was like hand-in-glove, we went together”

“Gradually I decided to learn Football and there were days when I used to practice my passing with the wall, for hours. My mother screamed at me sometimes, but it never really mattered. Football was like my adrenaline and I was loving it”

Soon, Sasmita joined the Bhubaneshwar Sports Hostel in Orissa, which laid down the foundation to her National Team selection in 2007.

Taking a trip down the memory lane, and a gleeful Sasmita remembers her first appearance in India colors. “It was like my dream had come true. The feeling was surreal and out of the World”

“The minute I heard the National Anthem ring in my ears, I fell numb, like something had taken over me. Talking about it even now gives me goosebumps. The magnitude and intensity of one's debut perhaps cannot be explained in words. It is so powerful and moving”

Since then Sasmita has not looked back. She has been an integral part of the contingents which won three back-to-back SAFF Championships, the most recent one coming in November 2014. Her expertise on the left wing has provided India with a burst of ‘something out of the blue’ always, and with time she has risen among the ranks of Women’s Football in India.

“Winning the SAFF Championship is one of my proudest achievements till date, besides my first appearance for the National Team.”

“Winning matters in every aspect of life. It is something which cannot be compromised with”

Being one of the senior most members of the Women’s National Team should pile you with tons of pressure to perform, but not for the cool as cucumber Sasmita.

“Pressure is just an illusion. I take games as they come. Every Player is kind of the same, what matters is the hardwork done to hone one’s skill. Every Player starts from scratch, nobody is a born a Footballing god, then why be afraid of them?”

“If a Team gives its best on the field, then it becomes very hard for it to lose. Sometimes it becomes next to impossible. And being the best on the field will only come if the Team puts in the hardwork to perform together as a cohesive unit, while understanding each other”

With Women’s Football on the rise in India, Players like Sasmita Malik, who have toiled for the Nation have been embraced as Footballing icons by thousands of Football followers in the country. And not only that Players from other age-groups come and ask them for guidance, which in the words of Sasmita, “leaves me flabbergasted and flattered.”

“I am left in awe when young girls come and ask me for guidance. Here I was some years ago starting my Footballing sojourn and now I am here. It is just stunning in retrospect”

“The upcoming Players of the Women’s Team are good. They know what to do and how to do. We just guide them in confidence and tell them that, ‘yes, they can too’. We just give them a little push which is required to boost their confidence”

Not only that, the sprightly winger was instated as the face of FIFA Live Your Goals, a campaign aimed to extend the outreach of Women’s Football in India, alongside the legendary Bembem and Bala Devi.

“It is such an honor to be instated as the face of FIFA Live Your Goals. I thank the AIFF for finding me fitting of the description. Things like these motivate you to perform even better when you go out and play”

With Women’s Football on the rise in India, the posterity needs role models to emulate. And who better than Sasmita Malik herself – a character which showcases the adage “Practice and hardwork makes perfect” to sheer perfection.