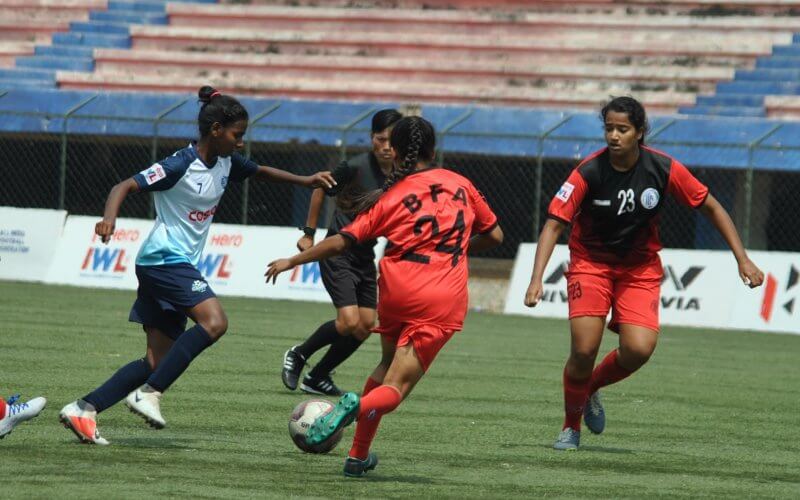 Bengaluru, February 06, 2020: Defending champions Sethu FC confirmed their place in the semifinals of the 4th Hero Indian Women’s League (IWL) in style, after registering a dominant 6-0 victory over Baroda Football Academy at the Bangalore Football Stadium on Thursday (February 06, 2020).

Sethu’s Sandhiya had a clinical afternoon in front of goal, bagging four, with Amsavalli and Karthika adding the remaining two.

The champions were stunned by Group A leaders KRYPHSA in their second game, but have come back all guns blazing, with the defeat now firmly behind them.

They showed no respite and drew first blood in the ninth minute when Baroda keeper Afshan Ashiq came off her line to thwart danger and in an attempt to take the ball of Amsavalli’s feet, completely missed it, allowing the winger to round her and feed Sandhiya on her left, who made no mistake with the goal gaping wide open.

Sandhiya added her second in the 15th minute after being played through on goal. She timed her run to perfection, beating the offside trap and with ice running through her veins, slotted the ball home to the keeper’s bottom left.

Amsavalli netted the third in the 34th minute, in what seemed like a carbon copy of the second goal after which, Sethu released their foot off the pedal till the last 15 minutes.

Sandhya completed her hat-trick in the 75th minute, capitalising on yet another lapse in the Baroda backline. Karthika added one of her own three minutes later, with the floodgates now wide open before Sandhiya added her fourth of the afternoon in the 82nd minute, to take her IWL tally of the season to 13 goals, just two behind Gokulam Kerala’s talismanic forward Sabitra Bhandari, who has 15.