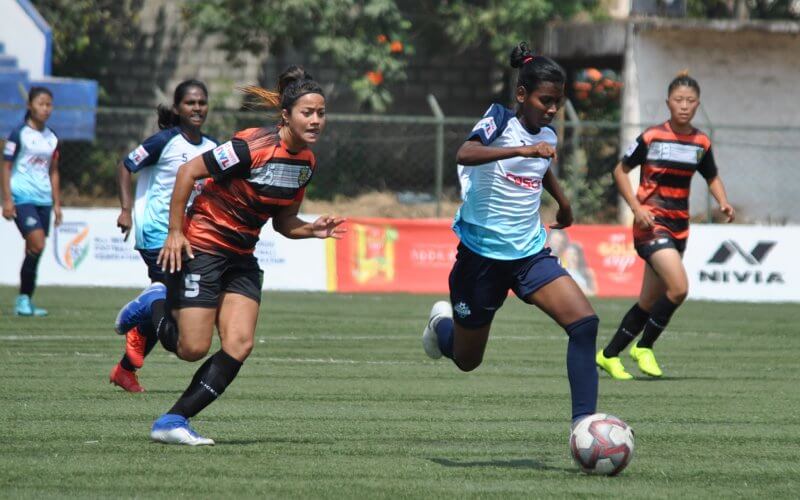 Sandhiya (12', 90'), who is in a fine scoring run in this tournament, added another brace to her name besides Sumithra (39') who scored a screamer from 30 yards out.

The intention was substantially clear from the get-go and the Madurai-based team didn't need to wait for more than 12 minutes to open the scoring. Jabamani Tuduintercepted a long ball from Kickstart FC and lobbed it to Amsavalli, who was operating from the right flank.

Amsavalli put in a long through ball for Sandhiya, who didn't waste any time to dink it over the goalkeeper's head to put the defending champions in the driver's seat.

Sethu shifted the gears in their pursuit of the second goal which came in the 39th minute from Sumithra. Following an array of attacking movements by Anita Basnet and Sandhiya, the opponent goalkeeper intervened and was able to thwart the attack. On the rebound, Sumithra, from 30 yards out, hit the back of the net with a powerful drive to hand Sethu a comfortable 2-0 lead at the break.

At the stroke of the final whistle, Sandhiya tucked in another goal to take her tally to nine, second to Sabitra Bhandari of Gokulam Kerala FC, who has already scored 14 goals in three outings. Sumithra breached the defence of Kickstart FC and rolled it to Sandhiya. The poacher, cutting loose of her markers, rounded the Kickstart FC goalkeeper and tapped it home in the 90th minute to seal the fate of the match.

Following the win, Sethu's tally has gone up to nine points from four matches whereas Kickstart stay on six points having played an equal number of matches. Kickstart will take on BBK DAV in their next outing at 12 PM on February 5, 2020 before Sethu face-off with Baroda FA at the same time on the next day (February 6, 2020).