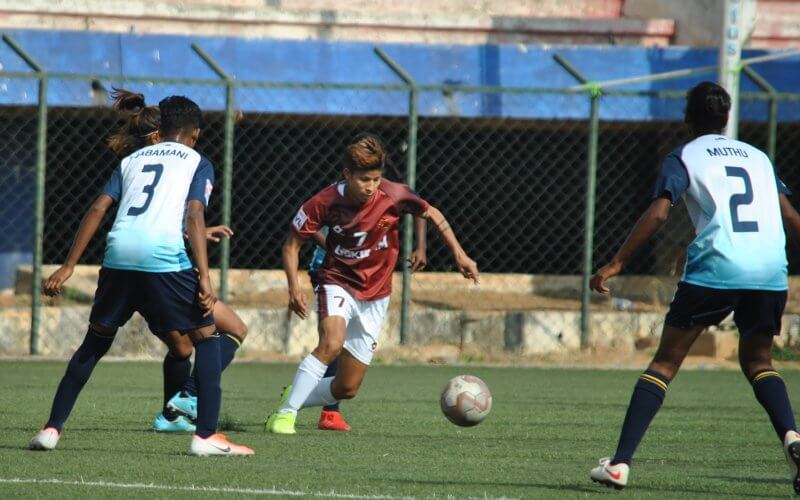 Manisha Kalyan broke the deadlock with a brilliant free-kick before Sabitra Bhandari added the second a minute before half-time. The Nepal international rubberstamped Gokulam’s place in the final by adding a third goal late in the second half.

The match was well-poised for an even encounter, with the Malabarians being the IWL high-flyers and champions Sethu embracing the prospect of defending their crown.

Manisha Kalyan’s wonderful free-kick from about 35 yards from goal went in off the underside of the crossbar to break the deadlock in the 21st minute, thus adding another wonder-strike to the growing inventory of IWL stunners for the season.

Talismanic forward Sabitra Bhandari continued her hot streak in front of goal, adding the second in the 44th minute after a wonderful through-ball from Kamala Devi had put her through on goal.

Sethu roared back in the second half and were left to rue a golden opportunity in the 53rd minute. A rare mistake from keeper Aditi Chauhan saw her throw the ball straight at the feet of Amsavalli, who wasted no time in playing Sandhiya through on goal. The ever-reliable forward, who has 13 goals to her name this season, blasted her shot over the bar to everyone’s disbelief.

The Madurai outfit didn’t give up the chase as the ball fell to Sandhiya again inside the six-yard area, with 15 minutes remaining on the clock. However, her effort was collected comfortably by Aditi Chauhan.

Sabitra Bhandari added the third, pouncing onto yet another delightful pass from Kamala Devi. She got away with sheer pace and lethal as ever, made no mistake.

Gokulam Kerala are now set to play their maiden IWL final, where they will be taking on Manipur’s KRYPHSA FC.