Women Football
Running on the lush green pitch is what everyone is waiting for: Maymol Rocky 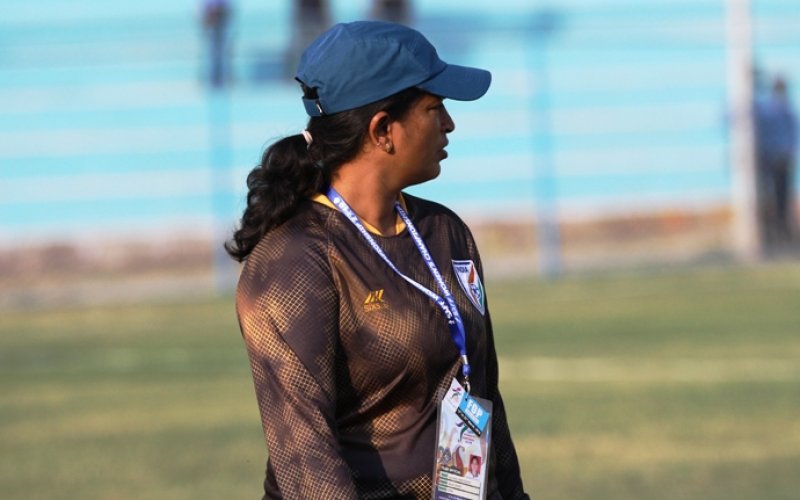 NEW DELHI: With the India Women's Senior National Team assembling in Goa from December 1 2020 to January 15, 2021 as part of their preparation for the forthcoming AFC Women’s Asian Cup qualifiers, Head Coach Maymol Rocky spoke at length about the re-start of training post the pandemic, the challenges at the Qualifiers, the training schedule, “2022 as an epic season,” and much more. EXCERPTS:

How does it feel to resume training post the lockdown?

The girls have not played football for almost nine months. They are all excited to join the camp. We haven't seen the women's team playing for a long time. As of now joining the camp and running on the lush green pitch is what everyone is waiting for.

What are the initial challenges that you will focus on?

We have been in touch over online sessions and phone calls. But physical interactions always value more, at least in terms of guiding and coaching players. The girls have been following the diet regime and strength and conditioning routine since the start of this unprecedented scenario but the need of the hour is getting used to ball once again.

Initially, our target is to get the coordination within the team back. Football is a team game and the purpose doesn't get served until everyone is in sync. We're looking forward to starting from scratch and get in the grooves quickly.

Special arrangements have been made to resume the camps in order to follow the COVID-19 guidelines and protocols. How big a task will it be to adjust to the new normal?

The 'new normal' is absolutely a new concept and we have to live along with it. Warm-up, conditioning, even drinking water during a game is not going to be the same as before.

After the prolonged suspension, we are slowly getting back to normalcy and I need to thank Mr Patel, Mr Das and Abhishek for planning the 45-day periodization in Goa. The safety of the players and support staff comes first and we'll not take any chance on that. The protocols are in place and every single step will be taken in adherence to that.

Football has been among the first sports to make a return in India ever since the COVID-19 lockdown was lifted. What are your thoughts on this?

We all were closely following the Hero I-League Qualifier in Kolkata and I can't express how happy we were when the tournament concluded successfully. The Hero Indian Super League has also kicked off in Goa and Hero I-League is duly scheduled.

In terms of National Team camps, Bibiano's (Bibiano Fernandes) boys have already assembled in Goa and Venky (Venkatesh Shanmugam) has started grooming a new group of boys for the next season.

2022 is going to be a massive year for Women's Football in India. How will it boost #ShePower for taking Indian Football Forward Together?

2022 is going to be a massive year for women's football. With the FIFA U-17 Women's World Cup being shifted beside the AFC Women's Asian Cup which has already been scheduled in 2022, we can expect a spike in interest amongst young girls towards playing football.

More girls will join football which, eventually, will make it a bigger pool of players in the years to come. What more can we expect in a year which will help us rewrite the history of women's football in our country!

Given that we are approaching the Women's Asian Cup fast, how do you want to mould the team in the next year or so?

We all are excited about that but there lies a huge responsibility in terms of delivering on the pitch. We've to be at the top of our preparations so that we can compete from the get-go. Although we still have a year or more, the preparation is a long-term process and competing with the likes of Asian's superpowers will be a massive task.