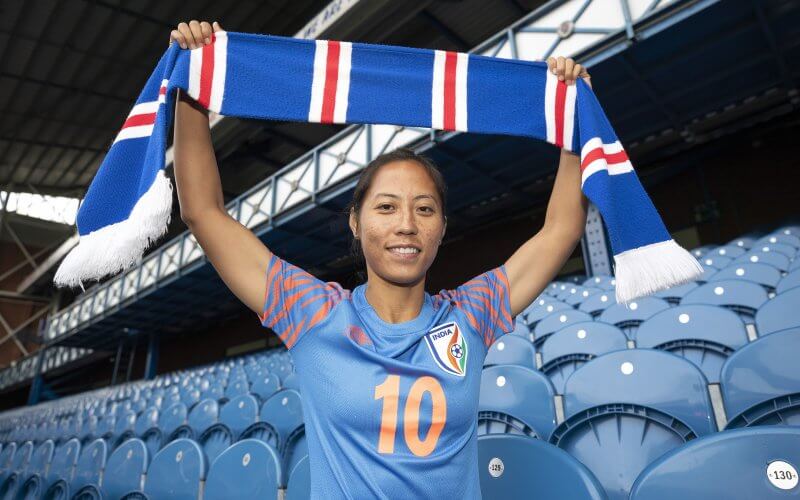 NEW DELHI: Indian Women’s National Team striker Bala Devi described playing for Rangers Women FC as a “whole new experience”, where she gets to share the pitch with a number of quality players from various countries.

On a candid chat with AIFF TV, Bala Devi, who became the first Indian woman footballer to sign a professional contract in Europe earlier this year, explained experience with the Scottish club.

“It’s a different country and a whole new experience. There are many players from Scotland, Canada, USA, France. It’s a huge challenge for me but I am gaining a lot of experience from them as well. But most of the time we talk about football so it’s a good thing for me,” said Bala.

🗣️ @BalaDevi_10: I sometimes miss home 🏡, but then I remind myself the reason why I have come here to @RangersWFC 🙌#BackTheBlue 💙 #ShePower 👧 #IndianFootball ⚽ pic.twitter.com/GGntO86LM2

The 29-year-old went on to explain the way technological developments in the world have been put to use, in order to help the football players at the club.

“Nowadays we have to wear GPS in our boots which allows the team to track how each player is performing. How much we touch the ball with both feet, how much distance we cover at what intensity. So all the players try to give their 100 per cent during the sessions.

Bala, who has been living in Glasgow, Scotland since her move to the club, has had to go through the phase of the worldwide lockdown in the Scottish capital, where she continued her indoor training.

“During the lockdown, we had five sessions in one week. Sometimes we have two sessions in a day and then we have to hit the gym after the training. But we have fun too,” said Bala.

While she did have to adjust to life in Scotland, the India international believes that the football she is playing at Rangers is similar to that back home, with a few changes.

“I am playing the same way I was playing back home. But over here the game needs to be played with a bit more physicality. The players are strong and I had to adjust to the weather,” she said. “But I had gradually worked on it and its much better now.”“I miss home at times, but I know the purpose behind coming here and so many people have expectations from me. I just need to continue giving my best,” stated Bala.