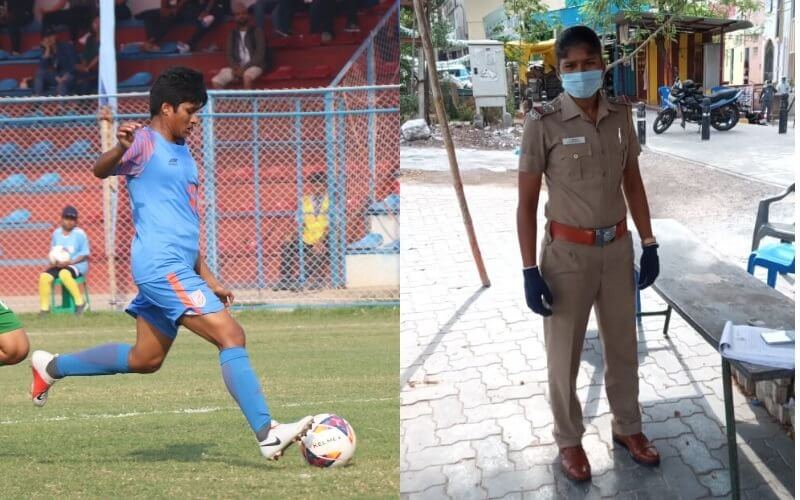 NEW DELHI: The nationwide lockdown had transformed many otherwise buzzing streets across the country into tranquil expanses. It is on a few of such streets filled with ghastly echoes that the quaint figure of a female police officer goes about her duty with her colleagues, making sure that movement is restricted amongst the people in order to flatten the proverbial curve.

Wearing the traditional khaki uniform of the Tamil Nadu Police -- a surgical mask stretched over her face, and a pair of gloves pulled over her hands for protection, Indian Senior National Women’s Team midfield general Indumathi Kathiresan is barely recognisable to those stopped by her for checking on the streets of Anna Nagar, Chennai.

“It has been a difficult situation for the entire country. But taking the necessary precautions is paramount to the safety of one and all,” said Indumathi to the-aiff.com. “We try to ensure that everybody is observing the guidelines and that nobody who does not need to be outside.”

Being a footballer at the highest level in the country, Indu, as she is fondly called by her teammates in the dressing room, is no stranger to a disciplined and regimental life. However, the lockdown has meant that she has had to follow a rigorous routine, where she has to report for duty at seven in the morning, and has to keep patrolling the streets till almost midnight every day.

“It has been a demanding time for me personally. I have barely had the time to do anything else. In difficult times like these, you generally want to spend some time with your family, but I have not had much opportunities to do that,” Indumathi informed. “It is a call for the nation. I have to play for the nation every day during Covid19 pandemic, and I had to respond fast.”

The creative midfielder whose duties keep changing on a day-to-day basis, feels that the lockdown has been especially difficult for her fellow police officers.

“Our duty schedules keep changing. Sometimes we are on night duty as well, sometimes vehicle-check, and so on,” the Tamil Nadu Police Sub-Inspector stated. “Some of us like myself, have to travel long distances to our stations as well. It has been a difficult time. But I don’t have any complaints.”

Despite such difficulties, however, the 2019 SAFF Women’s Championship joint-top scorer feels a sense of honour, serving her country whichever way she can.

“Of course, it is an absolute honour to play for India. There are some moments in the India jersey, like when we qualified for the Olympic Qualifiers Round 2, or when we won the SAFF Championship last year…I will never forget these moments,” she said.

“But I also take a lot of pride in serving the country in my police uniform, at a time when the nation needs us the most. I will keep serving as long as my nation needs me to serve,” Indu informed with a quiver in her voice.

The 25-year-old, who also won the Hero IWL title with Sethu FC last season hopes that her toil in the police uniform during this emergency will help people understand the importance of taking the necessary precautions in order to prevent contracting the Coronavirus.

“It is for the people of this country that my colleagues and myself are working day and night. We hope that you too, in turn, would help us out by following the safety precautions and keeping yourself safe.”