Women Football
Kryphsa is our family away from family, reveals Dangmei Grace 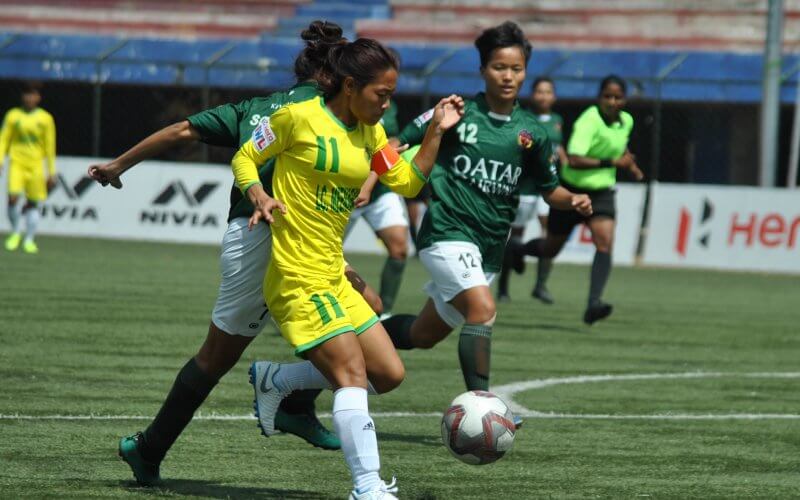 BENGALURU: Dangmei Grace, who was crowned as the Emerging Woman Player of the Year by the All India Football Federation for her exploits in the last year, feels "the closely-knit family" within Kryphsa FC is the secret of their success in the ongoing Hero Indian Women's League 2019-20.

"We have been together for more than ten years. It's like a closely-knit family and this is our secret of success," Grace opined, "Apart from Anju (Tamang), all of us have played in the same club since childhood. Anju, Ratan, Sweety Devi, Ranjana Chanu and others are very close to each other and it never feels we are away from our family. The strong bond within ourselves helps us excel on the pitch."

Kryphsa have conceded only one goal in 5 matches, fewest by any team to fix a final date with Gokulam Kerala FC, which is scheduled at the Bangalore Football Stadium on Friday (February 14, 2020). Kick-off is scheduled at 2 PM IST, and the match would be streamed live on the Indian Football Team Facebook page.

Although the Manipuri outfit hasn't scored at will like Gokulam Kerala or Sethu FC who netted 28 and 23 goals respectively in the group stage, they showed utmost professionalism on the pitch and mustered the required results. They finished at the top of the table with 15 points from 5 matches, having scored as many as 15 goals and conceding none.

When Ratanbala ransacks the opposition, Sweety Devi walls the defence – it's a perfect synergy of the young Manipuri girls who are just one step away from lifting their maiden Hero IWL trophy. Dangmei Grace, the skipper, is someone who has kept the unit close – on and off the field – a natural leader.

"We all enjoy other's company. If someone feels low, we keep hands on her shoulder and cheer her up. Kryphsa is our family away from family," Dangmei echoed.

Although the idea of 'equality' goes around in the country, we still need to enforce a campaign to let the girls live a peaceful life and educate themselves. But, Simon and Rita Dangmei, the parents of Grace, feel otherwise. The progressive family that hails from the Dimdailong village in Manipur, brought up their daughter in much the same manner as her two brothers.

"I keep my hair short, always, since my school days,” Grace smiles. “I used to play around with my brothers and other boys. I have always been attracted to sports rather than other amusements. In our family, I was also treated in the same manner as the sons were. There was no discrimination at all.”

Interestingly, one of her two brothers has also started playing football and he has already started getting praises from different corners of Manipur.

“One of my two brothers has also started playing football. My parents have always been very supportive of playing the beautiful game and they take good care of me, always. Otherwise, I could not have done whatever I have (done) until now," an emotional Grace said.

A little girl from the Jesuit Missionary school, who has never said no to any outfield sports, was introduced to football as a substitute, stopgap solution – one could have hardly dreamt the tiny girl would become one of the country's promising footballers in five years, nothing less than a fairytale indeed!

"Since my school days, I was always into sports. Be it athletics, basketball, anything and everything which I took part in. I loved sprints – 100 meters and 200 meters were my favourites," Grace continued.

"But, I got introduced to football very late, not before class VIII. There was a tournament going on in our locality and the team wanted a player because one of their players went to Odisha for an U-13 tournament. My dad, who is an ardent follower of football, allowed me and I, along with my friend Surbala, went. That was the start, in 2009. I was in the eighth standard then."

Grace's nimble touches and fluidity on the pitch didn't go unnoticed and the coach handpicked her for coaching further. With more polishing, the diamond started glowing and sailed for more voyages, destined to achieve greater things.

One year later, Grace's name was nominated for Manipur U-14 trials and no prize for guessing, the agile forward walked into the team without much fuss, and even went on to make a significant impact in Manipur's triumphant Sub-Junior NFC campaign in Uttarakhand in 2009-10.

"There was a trial for U14 Manipur team next year (2010) and my coach nominated me. Luckily, I got selected for Manipur team for the upcoming Sub-junior NFC," Grace informed, "We got to know that National scouts would be present there. It motivated us further. We beat Odisha 1-0 in the final to win the trophy."

There was no stopping for the girl since then. She was selected for the U14 Football Festival in Colombo, Sri Lanka and she started against the hosts Sri Lanka in India's first match.

"It gave me goosebumps. It still does. I, in my wildest dream, have never dreamt of representing my country. Manipur has a rich history of football but you know what, no one from my village, before me, has played for India. I pinched myself to make myself believe," her voice choked.

Three years later, she got her first Senior National Team call-up during the 2014 AFC Women's Asian Cup qualifiers in Palestine. India were grouped along with hosts Palestine, Chinese Taipei and Myanmar in Group D.

"It was a moment which I wouldn't forget in my entire lifetime. I replaced Premashwori against Chinese Taipei in our second match before starting against Palestine in the next one. While we lost 1-2 against Taipei, we drew 1-1 against Palestine."

Grace added further, "Honestly speaking, I got carried away completely. The ambience, the atmosphere of the National Team – it didn't sink in until the next day. Slowly, I was completely awed by the circumstances and slowly, pulled myself back to concentrate on the game."

There is a famous quote which says “Put in the hard yards nevertheless, don’t expect the results.” Grace learnt it by her heart and continued to toil hard on the pitch. Since making her Senior National Team debut in 2013, she improved with each training session and finally, in 2019, she was chosen as the “AIFF Emerging Woman Player of the Year” – an enviable feat indeed. Ashalata Devi was adjudged to be the “AIFF Woman Player of the Year” as well.

“Asha di (Ashalata Devi) and I were asked to go to a meeting, and none but Praful Sir (Praful Patel, President, AIFF) congratulated us. Neither Ashalata nor I could believe it in the first place and we were caught off guard completely. Thank you, AIFF for this. We will be indebted to AIFF always,” the promising 24-year-old forward said.

Grace has already tasted success in the last edition of Hero IWL with Sethu FC where she teamed up with none other than Ashalata Devi, current National Team skipper. Grace, meanwhile sounded cautious 48 hours before hitting the pitch for the final showdown of the ongoing Hero IWL.

“Yes, we can feel it but we can’t just be carried away to let the opportunity go. I have won it before for Sethu FC in the last edition and know how significant it is,” the forward continued, “In 2017-18, we (Kryphsa) lost to Rising Student’s Club in the semi-final and it still haunts us. We just can’t let it happen once again.”

Kryphsa lost to eventual winners Rising Student’s Club in a penalty shootout after they were locked at 0-0 after 120 minutes. However, Dangmei Grace’s spectacular display didn’t go unnoticed and she was adjudged to be the ‘Emerging Player’ of the tournament.

“It’s always great to repeat success stories and I’m not any different. We believe in ourselves and given the potential we have, we can do it on 14th. Besides the National team exploits, it’ll be a great achievement if we end up winning the Hero IWL again. For me personally, it’ll be an icing on the cake to win back-to-back Hero IWL winning medals,” Dangmei signed off.