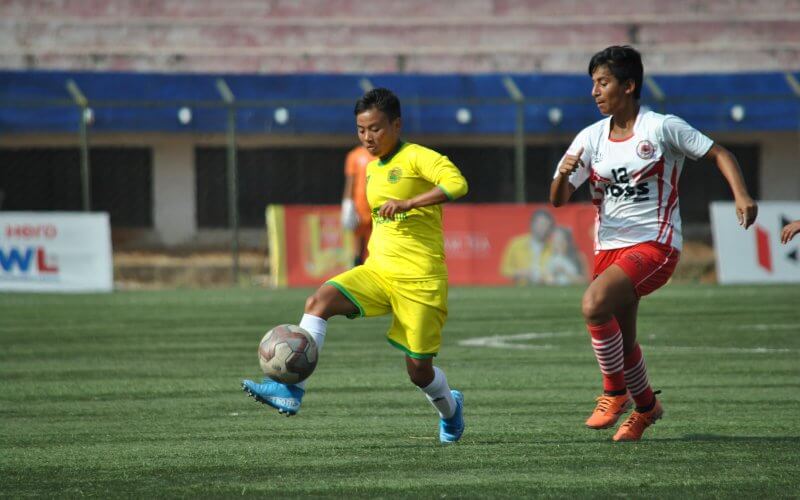 Bengaluru, February 2, 2020: Kryphsa continued their winning form in the ongoing Hero Indian Women's League 2019-20 with another routine 4-0 victory over Punjab-based BBK DAV at the Bangalore Football Stadium on Sunday (February 2, 2020).

Anju Tamang's grounder in the 18th minute opened the scoreline for the Manipuri girls, much to the dismay of the BBK DAV goalkeeper Radhika Khodre who went down well to stop the ball but was unable to do so.

Both sides entered the changing room with Kryphsa enjoying a one-goal lead at half-time. After the breather, they came out with more purpose and scored three goals to assert their authority in the tournament once again.

Two minutes after the clock crossed the hour-mark, Ratanbala Devi found the target, having sent goalkeeper Radhika wrong side, following a brilliant one-two manoeuvre with Anju Tamang at the edge of the penalty area.

In the 85th minute, Ratanbala Devi scored her sixth goal in the tournament with a perfect header off an equally brilliant corner by Ranjana Chanu to take the scoreline beyond their opponent's reach.

Sweety Devi joined the party in the last minute of the added time when the defender headed in a looping delivery from the right to add salt to BBK DAV's wounds and cement the result. Anita Devi took the corner and on the rebound, another long ball was floated from the right and Sweety, who was left unmarked by the BBK DAV defenders, powered it home.

With this win, Kryphsa consolidated their grip at the top with 12 points from four outings, having scored 14 goals in the process without conceding a single goal. On the other hand, BBK DAV, who are still rooted to the bottom, have been able to bag only a point from four matches so far.

Chaoba Devi's girls will face-off with FC Kolhapur City at 3 PM on February 5, 2020, after the BBK DAV girls take on local outfit Kickstart at 12 PM.