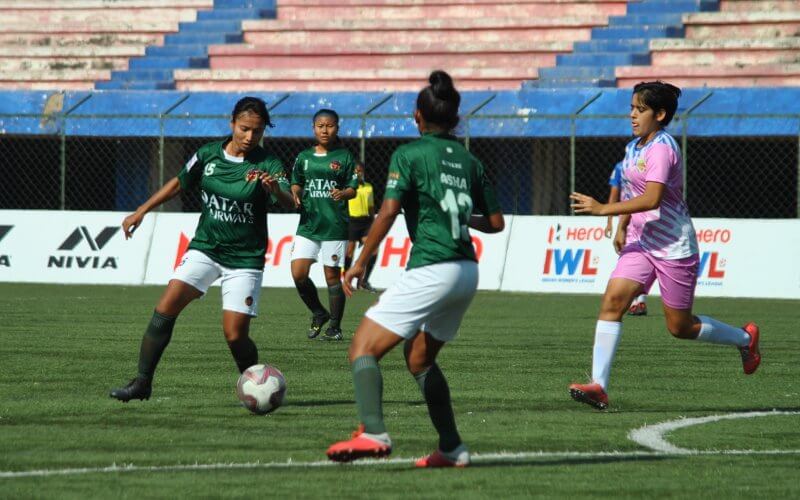 Bengaluru, February 03, 2020: Kenkre FC moved a step closer towards rubberstamping their place in the semi-finals of the fourth Hero Indian Women’s League (IWL) by registering a 3-1 victory over West Bengal’s Sreebhumi FC.

Kenkre skipper Soumya Guguloth scored a brace before Aarti pulled one back for Sreebhumi to make it anyone’s game. Asha Kumari added a third early in the second half for Kenkre and allowed them to sail on the two-goal cushion towards three points.

Sreebhumi, who are now mathematically out of the race for a place in the IWL semis, needed to win this fixture to keep their hopes alive. The first blow arrived just five minutes into the game when Soumya Guguloth soared the highest for a corner and scored a clinical header. She landed awkwardly in the process which left many in the ground concerned, but the skipper was able to carry on and was met with a huge round of applause when she got back to her feet.

Serving as the epitome of leading by example, Soumya displayed sheer persistence and after forcing a Kenkre defender into losing possession, she pounced onto the ball sharply and with the keeper coming off her line, Soumya made no mistake in making it 2-0 in the 18th minute.

Sreebhumi have shown fight throughout the campaign and despite being down, they were certainly not out. They made a corner routine count in the 33rd minute, with Aarti doing the honours and heading it past Monika Devi in the Kenkre goal.

The game was poised for an exciting second half but Sreebhumi’s momentum was deflated early on. In the 47th minute, it was Soumya again who set up Asha Kumari with a delightful through ball and the latter delivered with precision to make it 3-1.

With that result, Kenkre have now registered nine points and remain second, while Sreebhumi move down to fourth with as many points.

For her inspirational display, Soumya Guguloth was awarded the Hero of the Match accolade.