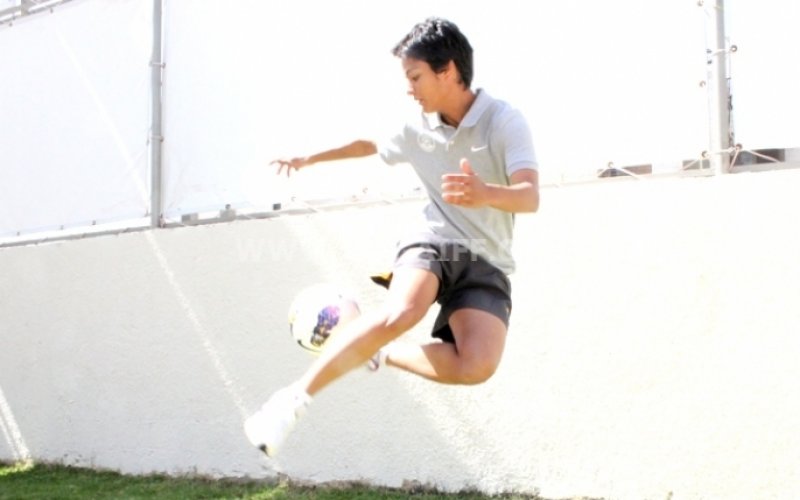 WEST BANK: From a juggler to a footballer -- the journey has been nothing short of spectacular for Jyoti Ann Burrett. The India Women’s Senior National Team striker literally burst into the scene, making it to the final 23-member Squad for the coveted AFC Women’s Asian Cup (Qualifiers). In freewheeling interview to www.the-aiff.com the 23-year old chronicles her journey from the juggler to a professional footballer in the Indian Team, her aspirations and much more. EXCERPTS:

Throw some light on your journey from a juggler to a National Team player.

I loved to do all sort of things with the ball. I wanted to become a professional juggler. Hockey and Squash stayed my other favourite sports. But football stayed my first love and like every other kid, dreamt of representing my country.

Unfortunately, I didn’t know the path to wearing the National jersey. I did not know about National Camps. I only got to know about it in 2008 when I came to Delhi and started playing for the State.

While playing for Jaguar Eves, a Club in Delhi I got to know about the Camp for the AFC Cup. I went for the trials and got selected.

Is life different in the National Camp?

It’s a different feeling. Here you are representing your country. All my friends and teammates who I have played with also dream of being here. So it’s an achievement for sure. And when the National Anthem is sung, I have tears flowing down my eyes. But I know, this is just the beginning. There’s so much to achieve.

Elaborate on the ‘juggler’ most don’t know.

I was fascinated by juggling from a tender age. At that stage, I wanted to be a juggler and not a footballer. I participated in juggling competitions and kept on trying new tricks. I can do a lot of aerial movements with the ball on my feet. There was a time when apart from my studies, I just used to juggle the ball. It was an addiction. Gradually when I came to Delhi and started playing for the State, I developed interest in the sport.

When did you start it?

It was way back in 2004 when I watched an advertisement which had Ronaldinho, Edgar Davids, Totti among others featuring in it. Thereafter, I started with a tennis ball. I was 14 then. Gradually, I started appearing in Competitions – an intra-college talent hunt and another Free Style Competition. I was the only girl in both the categories.

Do your juggling skills help you on the field?

It helps in sharpening your trapping skills and enhances ball control.

You also played football in England. Tell us more about it.

I completed my Masters in Sports and Health Science from Exeter University. There, I played for my University Team. My Coach at the University told me to play as a striker and I have never looked back since then. I have also trained with Tottenham Hotspur in their pre-season Camp back from June to July in 2012. It helped me immensely.