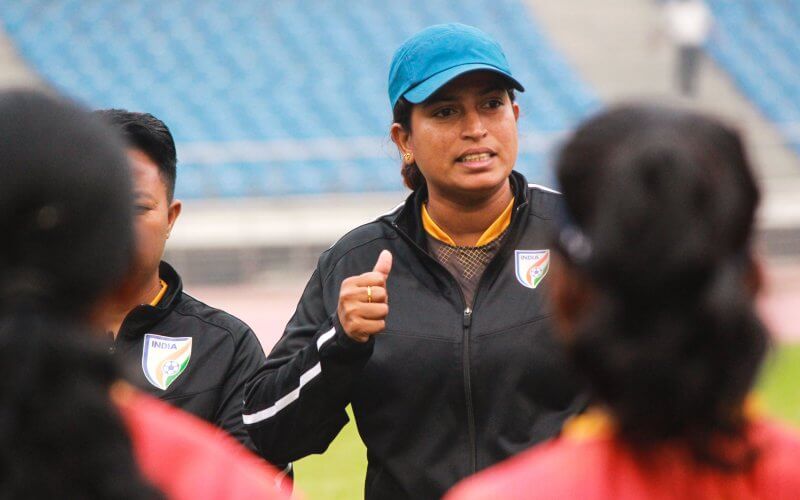 NEW DELHI: Indian Women’s Team Head Coach Maymol Rocky has attributed the rapid improvement in her team to the “introduction of strength training” into the regular training regime of the players.

Speaking about it at length on AIFF TV, Maymol referred to the period when she first introduced it in the team. “We were preparing for the Olympic qualifiers and I remember the meeting with (General Secretary) Mr. Kushal Das sir and (National Teams Director) Abhishek Yadav. We had a longish camp and that was where we first introduced strength training in our regime,” Maymol stated.

“We had two physios, and both of them would be working 24-7 on different training exercises for the girls. We’d have one strength session in the morning, and a tactical session in the evening. We’d also have a video analysis session where we would show the girls where they went wrong and work on improving their games. These things made a world of difference,” she added.

“Girls also need to be strong on the pitch, and this unit has proven that.”

Along with the strength sessions, the physios also paid a lot of attention to the diet to supplement our training procedure.”

“It’s all about knowing what to eat. They’re used to eating the usual home-food when they go back from the camp. But I made it a rule that if anybody comes back overweight they’d have to do a lot of extra work during the camps. That has got the girls cautious,” Maymol opined.

With this rigorous preparation India went on to make history as they qualified from the AFC Women’s Olympic Qualifiers Round 1 for the first time in their history.

THREE PILLARS OF THE WOMEN’S TEAM

While the team’s core strength, fitness and footballing aptitude was being formed at the camp, Maymol realised that it was a comparatively young and inexperienced side that she had at her disposal.

While that meant a lot of enthusiasm on the pitch, she also understood that she needed a few cool heads who could guide the younger ones as per the demands of the situations.

With that in mind, Maymol identified three players who have gone on to form the three pillars along the proverbial backbone of the side – goalkeeper Aditi Chauhan, captain Ashalata Devi, and striker Bala Devi.

“I have relied heavily on these three to keep the spirits high in the team. They are the three most experienced players in my team. They have really held the squad together,” said Maymol.

“Aditi and Asha were always around me letting me know how the players felt, and what they wanted,” she quipped. “Asha has the bigger responsibility of guiding the girls as she is the captain. Aditi also knows when to be serious or when to lighten the mood.”

“Bala is someone who works really hard and she is reaping the results. Playing for a foreign club of that stature really makes her a role model for younger girls here in India,” said Maymol. “Being a senior Bala also has that quality of balancing fun with seriousness. You need these characters in the dressing room.”

“2019 was a golden year for us. We played an unprecedented number of matches in the year. We travelled to so many countries and played under so many different conditions. We have never done that before. Girls were really lucky,” she quipped.

Women Football Forwards together: Incredible to learn from Bala-d...