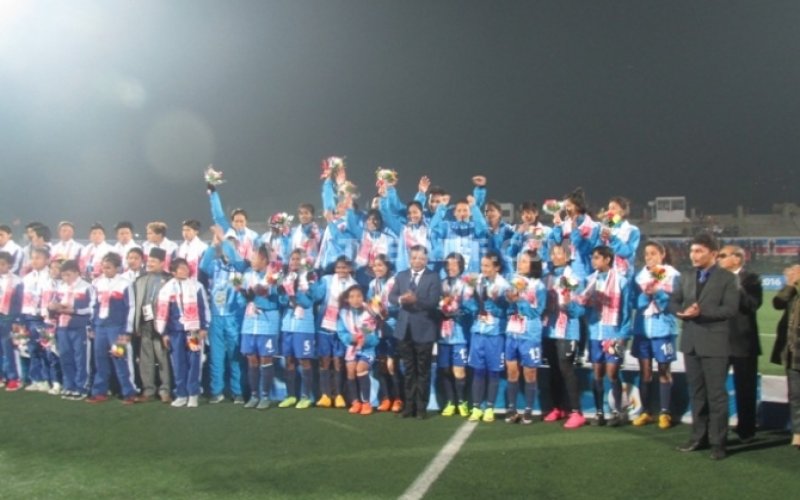 NEW DELHI: The Indian Women’s Senior National Team bagged Gold in the ongoing 12th South Asian Games as the ‘Women in Blue’ steamed past Nepal 4-0 in one sided Final at the Jawaharlal Nehru Stadium in Shillong on February 15, 2016.

A brace from Kamala Devi and strikes from Bala Devi and Ashalata Devi led the Indian Women to an easy win over their opponents, as the ‘Women in Blue’ continue to stamp their dominance in Football in South Asia.

The opening minutes of the match witnessed end-to-end stuff as both Teams tried to take an early lead, but to no avail. However, the Indian Women came close as early as the 2nd minute when Bembem Devi’s accurate through ball released Sasmita Malik onto goal. A last ditch clearance spoilt the party for the Indian Women as the attacking opportunity went astray.

Four minute later, the action turned towards the Indian goal and Indian goalkeeper Aditi Chauhan made a fine save to deny Nepal. In the 11th minute, Bembem Devi’s shot from outside of the box flew whiskers over the bar as the Indian Women searched for an early goal.

A moment of pure genius, nine minutes later, came close to opening the goal scoring tally for India when Kamala Devi feinted past her marker on the edge of the 18 yard box and unleashed a curling shot, which landed inches wide of the right post.

With the Shillong crowd cheering the Indian Women through with literally every touch of the ball, the ‘Women in Blue’ enjoyed a healthy spell of possession. And in the 32nd minute, the Indian Women took the lead as Kamala Devi, who was found clear of the defensive mix on the second post, tapped home a Prameshwori cross from the right flank.

Two minutes later, Kamala had the chance to double India’s lead but the Nepali custodian cleared her lines, acrobatically. In the 42nd minute Bembem Devi’s rasping shot following a Sasmita Malik corner earned a top draw save from the Nepali custodian.

India went into the tunnel leading, as the half-time scoreline reflected 1-0 in favour of the Indian Women.

Changing over, the Indian defence, which was called into play as Nepal enjoyed possession, disrupted Nepali raids on the Indian citadel with sheer acumen. In the 56th minute however, the tide turned in favour of the Indian Women as Kamala Devi volleyed her chance home, following an uncanny clearance from the Nepali defence line from an Indian corner, to make it 2-0 for India.

Nine minutes later, Kamala Devi wriggled her way past the Nepali defence and unleashed a rocket-of-a-shot, which went inches over the bar. In the 71st minute, Bala Devi tapped home a Sasmita Malik cross from the left flank as the ‘Women in Blue’ took an unassailable three goal lead.

The Indian Women initiated wave after wave of attacks in an attempt to extend their lead. In the 80th minute, the ‘Women in Blue’ put the fixture to rest as Ashalata Devi blasted home from distance to give India a 4-0 lead.

The Indian defence held tight and quelled any embers of a Nepali comeback and at the end of time the score-line read 4-0.

It was also a perfect farewell for Bembem Devi, the virtual face of Women’s Football in India for the last two decades, as the legendary figure ended her career on a high, captaining the Indian eves to defend their crown.