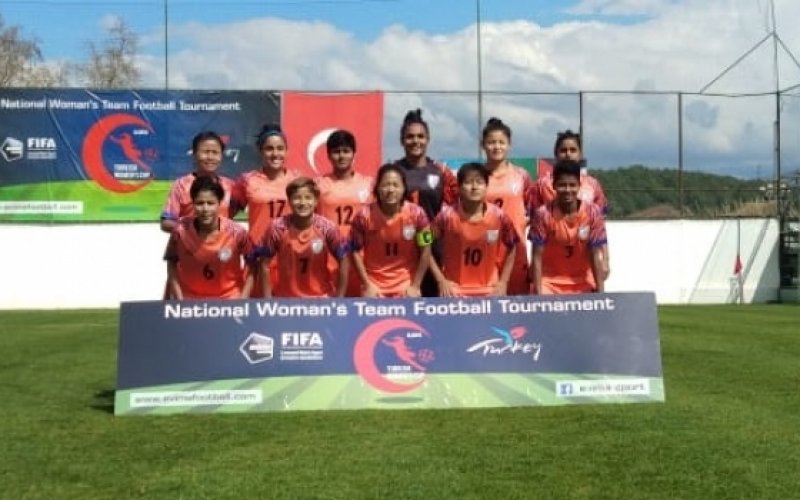 NEW DELHI: The Indian women's national team ended its run at the Turkish Women's Cup with a narrow defeat at the hands of Kazakhstan on Tuesday (March 5, 2019) in Alanya, Turkey.

As a result, India ended the tournament in sixth place after a victory in the group stage against Turkmenistan and losses at the hands of Romania and Uzbekistan.

The first 45 minutes failed to produce any goals, with India enjoying the lion's share of the chances. The Indian forwards created a flurry of chances in the first 25 minutes – with Sanju, Dangmei Grace and Indumathi all coming close to scoring the opener but were denied by the Kazakh defence.

In the 33rd minute, the Indian eves put the ball in the back of the net, only for the referee to rule out the effort for offside. Kazakhstan threatened the Indian goal in the first half on a couple of occasions, most notably in the 45th minute, but Indian custodian Aditi Chauhan was up to the task and saved a shot from a close-range free-kick.

The second half saw coach Maymol Rocky's charges come out fired up as they hunted for the go-ahead goal. Dalima Chhibber came close in the 58th minute with a shot from distance and just three minutes later, Ratanbala Devi's header looked destined for goal but was cleared by the Kazakh defence off the line.

Manisha came on for Anju in the 64th minute and tested the keeper almost immediately with a powerful shot. The Indian side continued to commit players forward as the match headed towards the end but the opening goal still remained elusive. Sanju, Roja Devi and Grace all recorded efforts on goal which, however, did not find the back of the net.

With the game scoreless after regulation time, the players headed for the dreaded penalty shootout. Ashalata Devi put India into a 1-0 lead as her Kazakh counterpart skied her shot. Dalima then stepped up to convert her effort before Manisha saw hers saved by the rival keeper as the score got locked at 2-2.

Grace scored from India's fourth attempt but Sanju missed her subsequent effort as the Kazakh side converted its last two shots, thus handing the Indian side a narrow 4-3 defeat in the shootout.