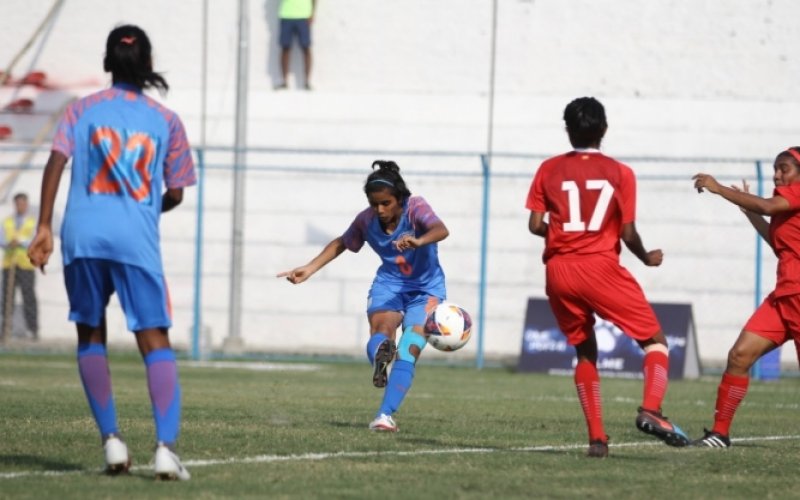 BIRATNAGAR, NEPAL: The Indian women's national team kicked-off its campaign at the SAFF Women's Championship with a resounding 6-0 win over Maldives at the Sahid Rangashala Stadium in Biratnagar, Nepal on Wednesday, March 13, 2019.

Dangmei Grace, Sandhiya Ranganathan, Sanju, Indumathi Kathiresan and Ratanabala Devi - all found the back of the net for India, who come into the tournament as defending champions, having won the trophy four times, so far.

The Indian team pressed forward from the first whistle, looking to seize the initiative from the get go. After a couple of close attempts in the opening exchanges, Grace put the defending champions into the lead eight minutes into the match, thanks to some fine pressing from the Indian attackers, which allowed the winger to latch on to a loose ball inside the box and slot it past the keeper.

Grace was heavily involved in the second goal as well, this time providing an assist in the 13th minute. A cross from the right was brought down excellently by Sandhiya, who showed great composure to bring the ball under her control with her first touch and with her second, she swivelled and shot the ball into the back of the net.

Coach Maymol Rocky's side continued to dominate possession and soon enough, the third goal came through Indumathi Kathiresan in the 22nd minute as she burst past her marker, raced towards goal and slammed it past the keeper with a powerful effort into the roof of the net.

Just four minutes later, it was Sanju's turn to get onto the scoresheet. A long cross-field ball from the right flank by Dalima Chhibber was brought down by the Indian left-winger. In a swift movement, she turned her defender, switched the ball to her right foot and curled it into the far corner of the net.

The Indian team continued its charge to widen the gap, with the Maldives keeper forced into a couple of saves. However, she could do nothing when Ratanbala Devi slammed home India's fifth goal of the match, which came from a direct free-kick from just outside the penalty area in the fourth minute of first-half stoppage time.

At the restart, Manisha came on in place of Indumathi as the Indian eves continued to assert their control over the game. The Maldives team dropped deep into its own half and a number of India's chances came from long range, with Grace, Manisha, Dalima and Sangita all coming close to extending their team's lead.

The tempo of the game slowed down as it progressed and in the last minute of the match, and Sanju added India's sixth goal of the evening. Seeing the rival custodian off her line, she launched a shot from distance that went over the keeper and straight into the goal.

With the result, the Indian side extended its unbeaten run at the SAFF Championships - which now stands at 20 matches.