Women Football
I WAITED FOR MY DAD TO LEAVE FOR OFFICE SO THAT I COULD GO OUT AND PLAY: BEMBEM DEVI 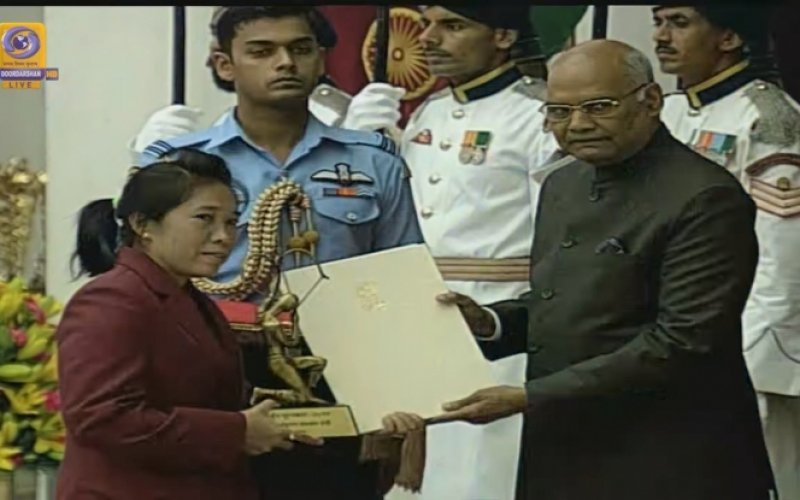 On a day when Oinam Bembem Devi was conferred the Arjuna Award, becoming the 25th footballer and 2nd women overall to be awarded so, she took time out from her hectic schedule to write for the the-aiff.com

I am speechless! I’ve struggled a lot, having given more than 21 years to the National Team. I’m proud that the Government has recognised my efforts. This Award is for all women who dare to dream. This is the Arjuna Award and it’s a dream come true for me.

My childhood wasn’t easy as I wasn’t quite allowed to play Football. I watched from a distance as boys of my age went on kicking about a ball. I used to wait for my father to leave for office and as soon as he did, I left too – to join the boys to play Football.

My father wasn’t supportive. He wanted me to study hard and be something else in life. So I used to play when he was in office and right before he came back I would sit down with my books. I was often caught. He scolded me, he wanted my well-being but my well-being was in football. I loved it way too much.

I began playing Football from a very early age. We had grounds both near my home and in my school. I even used to change my name and disguise as a boy so that I can play in age group tournaments. It’s been close to 30 years now. I’m lucky and blessed.

In 1991 when I got selected for the Manipur U-13 and it was a huge turning point. My mother supported me all throughout. She used to accompany me to the local tournaments but my father still wanted me to concentrate on my studies.

Then in 1995 everything changed when I got selected for the National Team. I finally had my father’s support. Even though I lost him two years later, I’m happy that he got to see me in National colours. He would have been very proud today. I miss him.

The whole journey has been full of ups and downs and I’ve been part of three different generations of the side. In 1995 I was scared to speak up and felt a huge pressure to perform. But the seniors were very warm and welcoming.

Then from 2001 to 2007, we were mostly of the same age and the bond formed with them was totally different. They are my best friends. We did almost everything together, we were so close.

Finally, 2007 onwards new girls started coming in, with some of them even 10 years or younger than me. It seemed life had come to a full circle. They reminded me of my younger days when I was scared of my seniors. I told them I was their ‘Didi’ and they could come to me anytime they want.

You know I couldn’t have done this without the support of everyone who has been directly or indirectly involved with my game throughout my life. My coaches, co-players, the support staff and the AIFF. From being the AIFF Player of the Year in 2001 to becoming the Captain in 2003 to winning the SAFF Games everything is due to the support I got from all quarters.

Retirement is funny. I thought I had retired but I came back for the SAFF Games. Then once again I came out of retirement for the inaugural Indian Women’s League although as a player-manager. But I guess it’s enough. I’ve already obtained my B Licence and now I’m aiming for the A. I want to have my own football training centre.

Apart from hard work and discipline, you need to always work on your game. Be it at home or at the camp, there is always room for improvement. You cannot let your fitness drop. It’s a 24x7, 365 days a year commitment to yourself, your game, your team and the Nation.