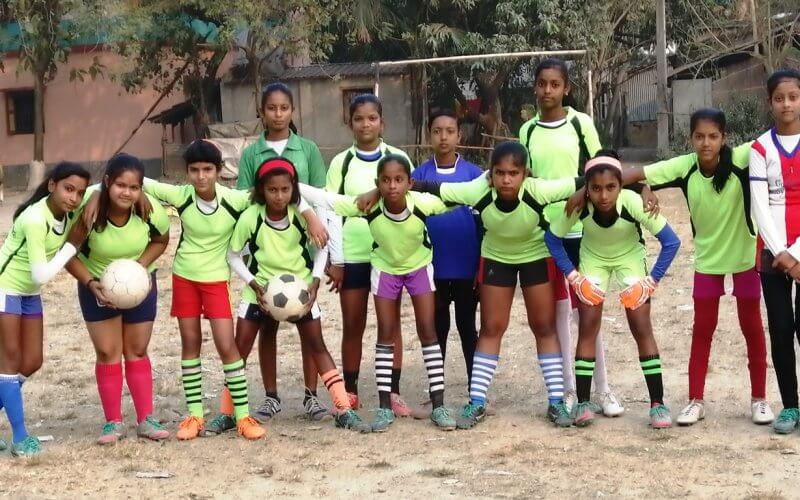 NEW DELHI: A generic trend in India suggests that parents of most girl child feel apprehensive to take part in any sort of sporting activity, let alone football.

But the people of Shondanga, a remote village near Nabadwip in West Bengal feel the other way. Bhupendranath Pal, a retired Banker and an avid football enthusiast made an effort to bring in girls to the football field defying all prejudices two years back.

Since then, a project which started with four young nervous girls has grown from strength to strength to gather fifty-six youngsters within less than two years – all in an endeavour to take Indian Football forward together!

"I always wanted to use football as a tool to have a sociological impact. Thanks to All India Football Federation, the Golden Baby Leagues have presented us with a perfect opportunity to make a strong connection with every single person in our society. That's why I strongly felt to introduce football to our locality, especially to the younger girls," Pal stated.

The AIFF D-license holder shared a never-heard-before tale with www.the-aiff.com while discussing Nabadwip Golden Baby Leagues which has already introduced more than 1,000 kids in two years.

"One day, while I was training a few kids, I oversaw four young girls gazing at us and enjoying the game. I asked them whether they were interested to join us. But they felt shy and ran away," he continued, "After 15-20 minutes they came back and that's when the girls' league saw the daylight – just with four girls. They kept on coming as found the zeal. They found a purpose. We inspired them and the leap of faith played a big role behind expanding the league. Now fifty-six girls are playing in that league."

There are five age-group leagues for girls of U-7 to U-10 and U-14. Whereas three teams comprising of seven players apiece contest the U-14 age-group, five teams of seven players each are enrolled in the other age-groups.

"Earlier parents were sceptical about sending them to play football. What I realised -- if they find the personal touch and sense of security they don't think twice to allow their wards. That's a big lesson I learnt from these families, who don't belong to well-to-do families but endure the struggle 24/7, called life.

Next year, the participation of girls spiralled significantly, taking it to 25% of the total enrolment cumulatively.