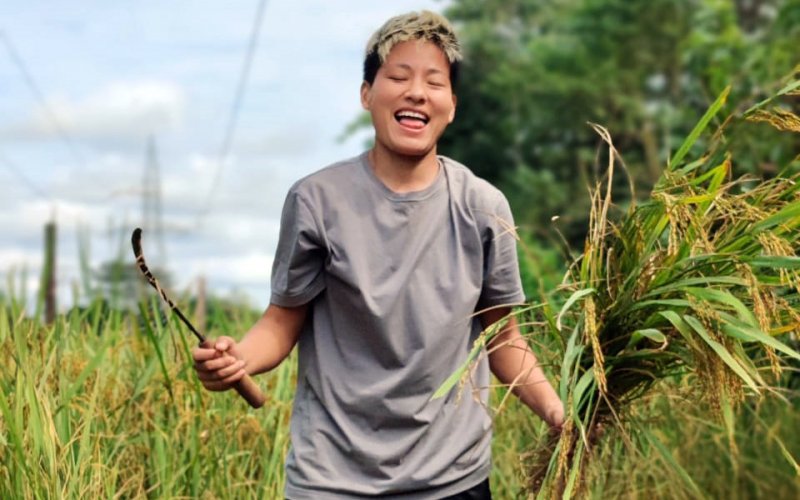 NEW DELHI: While the rest of the country braces up for the new normal of the festive season during a pandemic, the people in the small village of Rangalibazna in the foothills of the Himalayan Range in West Bengal are rejoicing a successful harvesting season.

Among those rejoicing the bountiful harvest of 2020 is Indian Women’s National Team forward Anju Tamang and her family. The Tamangs have been a family of farmers on the foothills of the Himalayas, just south of the famous tourist town of Darjeeling.

During the days, the Tamangs are seen sweating it out on their paddy fields, wielding the sickle with much expertise. Anju, who has taken a slightly different path (playing football) than the rest of her family, however, comes back home during the festive season whenever she can, to lend a helping hand.

“I used to do this a lot when I was a kid. But that is not so much the case nowadays as I often have to go to different places for tournaments or matches,” Anju Tamang said to the-aiff.com. “But this year, I have got the opportunity to come back home during this season, and I’m more than happy to help out in the field.”

🗣️ “The farming life has taught me to set goals but still remain humble even after you achieve them. My roots are here, and these are values that I will never forget,” says 🇮🇳 women's national team forward @AnjuTama10#IndianFootball ⚽ #ShePower 👧🏻 #BackTheBlue 💙 pic.twitter.com/Ij08mXrqnB

In the good old life of the village household, the entire family business is divided amongst the different members of the family.

“When it comes to reaping the harvest, it’s the women who do it. So it’s generally my mother and Bhabhi(sister-in-law) who wield the sickle during the harvesting season. I join them in this activity whenever I am home during this season,” she said.

The men of the family, on the other hand, are more involved in the work that needs to go in, once the harvesting of the paddy crop is done.

“Once all the crop is harvested, my father and brother get into action, starting the drying process before separating the grains from the plant. Just like football, this is a team effort as well,” laughed Anju.

A day in the life of Anju in the Rangalibazna village starts early on as she sets off for an early-morning training session with some local players. A quick breakfast follows the practice session before she joins her mother and sister-in-law on the paddy fields.

“A lot of players worry about losing fitness when they go back home. But that is not the case for me. We have to do a lot of farm work, and that keeps you fit in itself,” informed Anju.

The three women come in for a brief lunch before hitting the fields with their sickles again. Once the clock chimes four in the afternoon, Anju quickly wraps up her sickle and heads off for another training session, before finally turning in for the day.

“It’s hard work and you are left drained at the end of every day, but it’s so much fun. These days I don’t always get the time to come back and help my family out, but it’s so good to be able to do this,” she said.

A TIME TO BOND

While the women of the house toil away on the paddy fields with the vast expanse of the eastern reaches of the Himalayas loom over the background, this particular activity gives the Indian Women’s National Team forward ample time to bond with her family.

“All three of us talk about almost everything under the sun, while harvesting crops. It gives us a lot of time to catch up with each other. I am away for long durations during the year, so both my mother and Bhabhi love hearing stories about the National Team,” said Anju.

“In fact, farming activity has really helped me get to know my Bhabhi much better as a person.”

Coming from a farming family has helped the young striker with her footballing career, especially with regards to staying humble, despite achieving tall goals.

“Hard work. That is as important in the life of a footballer, as it is in the life of a farmer. It’s just that a farmer does not get as much fame as the former,” stated Anju. “The farming life has taught me to set goals, but still remain humble even after you achieve them. My roots are here, and these are values that I will never forget.”

Women Football Thankful to the Government of Jharkhand for hostin...

Women Football Thomas Dennerby to take charge as Head Coach of In...