Women Football
From 2017 to 2020, Kashmina aims to come full circle in the Hero IWL 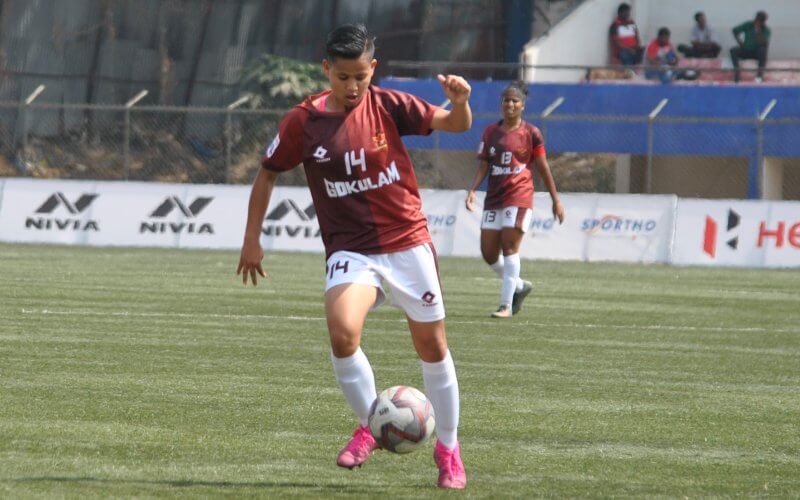 BENGALURU: After seeing three different winners in three seasons, the Hero Indian Women's League is on the cusp of welcoming a new winner yet again when Gokulam Kerala FC will lock horns with Kryphsa in the grand finale at the Bangalore Football Stadium on Friday (February 14, 2020). A young winger, who'll be racing down the flanks for Gokulam Kerala, will be on the verge of adding a fine feather to her hat, a second Hero IWL title as a player -- Kashmina Devi.

"Three years back, I hardly had any experience of playing against senior players but Bem di (Bembem Devi) got me in her team and eventually, I ended up being part of the winning side. It was something which I can never forget and I'll always thank Bem di for believing in me," an exuberant Kashmina told www.the-aiff.com after Gokulam Kerala registered a 3-0 victory over defending champions Sethu FC on Monday.

Kashmina, the 24-year-old winger, was an integral member of Bembem Devi's side while Eastern Sporting Union, the Manipuri outfit, went on to beat Rising Students to triumph the first edition of Hero Indian Women's League on February 14, 2017. Exactly three years later, she will hit the ground once again to repeat the feat and coach Priya PV would surely bank on her to win the first Hero IWL trophy for the Malabarians.

"Since 14-02-2017, I have traversed a long way as a player and have made my debut for the Indian National Team too, which was nothing short of a dream-come-true moment for me. It has been an exciting journey so far and hopefully, 14-02-2020 will add another glorious chapter to it," Kashmina sounded optimistic.

“My father ignited my zeal”

Mohd. Kashim Ali, a budding footballer who had dreamt of playing the beautiful game professionally, had to compromise owing to circumstances. But, he never let his dreams end and here starts the journey of Kashmina, his daughter.

"My father played in school and university-level but he dreamt bigger. He started to take me to the field and even today, he follows my game. He was my first coach and he ignited my zeal," Kashmina informed, "My chhota bhai (younger brother) also plays football, he is a goalkeeper.”

After plying her trade within Manipur, Kashmina finally got the breakthrough when she travelled to Delhi to play in Subroto Cup in 2012.

“After playing within Manipur, it was time to appear for the bigger test and Subroto Cup was the perfect platform. Luckily, I got selected and we went to Delhi. It was a learning experience for me that helped me a lot in future,” Kashmina added.

The youngster earned the limelight in the early phase of her career but that didn’t deter her from hitting the bull’s eye – a berth in the National Team. She first got the taste of national team when she was handpicked for the AFC U19 Championship 2017 Qualifiers, where she scored the opening goal against Iran in the first match.

“Yes, that was a terrific experience. I suddenly found myself in front of the goal and only the goalkeeper to beat. Although the match ended in a draw, it gave us major motivation for the upcoming matches,” she said.

One year later, she was handed her Senior National Team debut by head coach Maymol Rocky against Uzbekistan during AFC Women’s Asian Cup 2018 qualifiers in Pyongyang on April 7, 2017.

“I never dreamt of playing for India in my wildest dream. It was a privilege to wear the tricolour on my chest. Bala (Devi), Sasmita (Malik), Ashalata (Devi) were renowned names and sharing the pitch alongside them was something which I could never dream of,” an emotional Kashmina recounted.

“Communication is the key to success”

Kashmina, along with the likes of Grace, Promeshwori, Kamala have hit the right chord at the right time and their coordination along with attacking spearhead Sabitra ‘Samba’ Bhandari has been reaping benefits since the starting of the ongoing Hero IWL campaign.

On being asked the secrets of their success, she credited “communication and constant sharing of ideas on the pitch” for success.

“All of us are comfortable in Hindi and we never shy away from sharing our ideas on the pitch. Communication is the key to success for any team and we are no different,” Kashmina prompted.

The Malabarians have scored 31 goals in 6 matches until now, having conceded only 2 goals so far – a resounding feat undoubtedly.