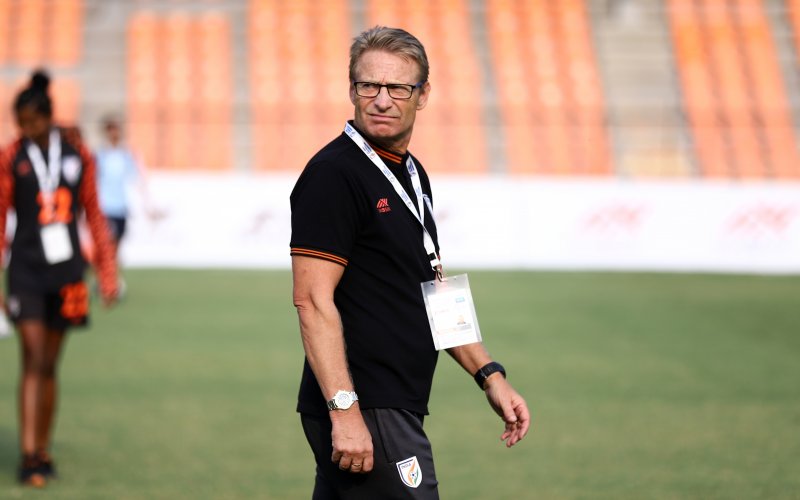 NEW DELHI: On Tuesday (September 29, 2020), Indian U-17 Women's National Team head coach Thomas Dennerby spoke to coaches across India at the ongoing International Virtual Coaching Conference organized by the All India Football Federation (AIFF). Speaking on the topic 'Current playing style of the U-17 World Cup team', the highly-experienced Swedish tactician explained the importance of understanding the attributes of players first and then devising the playing style accordingly.

"When I arrived in India in October 2019, we had a goal -- success at the FIFA U-17 Women's World Cup. People would ask what style my team would play even before I had met the players. However, when you arrive to work with a new team, you try to get an overview of the various things you need to know, such as the tactical, technical, fitness and mental aspects," the 61-year-old coach said.

He added, "Then, you try to find a way that suits the team best. You have to find your own playing style and vision. Football is like philosophy, there is no wrong or right. One has to try to improve the way you want the team to play while seeing what is best for the players."

Talking about the style he has adopted for the current team that is preparing for the upcoming FIFA U-17 Women's World Cup, Dennerby termed it as a 'technical' style which makes use of the players' 'extreme speed'.

"We decided to have a style that is more like the Asian style -- a technical style and passing game. We have players with extreme speed and we need to work with the passing and quick touches. Getting the ball out from defence fast, we can be quick on counter-attacks that we can use when opponents are unorganized. We have created a lot of opportunities that way, especially when we played against Romania and won one match as well," Dennerby explained.

He continued: "Without the ball, our style is zonal defence. We play as a close compact team with short distances between players so that we can work together and try to win the ball quick and high."

With the help of detailed diagrams, the Swede showed the participants the role he expects each player to play in certain situations -- both with and without the ball -- such as when an opponent winger dribbles into the box from the flank or when the team's attacking midfielder has the ball in the final third.

Dennerby shared the general priorities he has set for the team, with the first being always aiming to win matches irrespective of the strength of the opponents.

"The first priority is to win. We must always try to win, no matter the opposition. The second is team training to improve the game model. Then, we have factors such as the right nutrition, recovery, sleep and rest. If players don't do these right, they will not have the required energy in matches and training. Fourth, we have extra individual training, which is always as an addition to the second and third points and never instead of them," he affirmed.

He also emphasised on the importance of playing as a team being a key value, along with others such as having an 'on and off button'.

"There are not many rules around the team. Perhaps the most important one is being on time because that is extremely important. Be it a training session or a lecture -- players should be on time. Another important value is that the team is the star. It has different players with different skills but we win and lose as a team.

"In training, there has to be 100% focus and intensity. One can have fun and smile in training but it is important to choose the right time for it. Additionally, to live as a professional, you have to be in the full concentration zone many hours a week and so, it is vital to have some time off where you can fully relax," Dennerby maintained.

He underlined the role played by the support staff as well and stated that that the job of the head coach is to ensure that they all reach their 'highest potential'.

The Swede averred, "To create a good team, you need to have good staff around you. As head coach, your job is to make these people reach their highest potential. If they do their work well, the players will have a good environment and we will have a very good team."

Women Football Running on the lush green pitch is what everyone i...