Women Football
Every one of India Women's team is a star, mentions Dangmei Grace 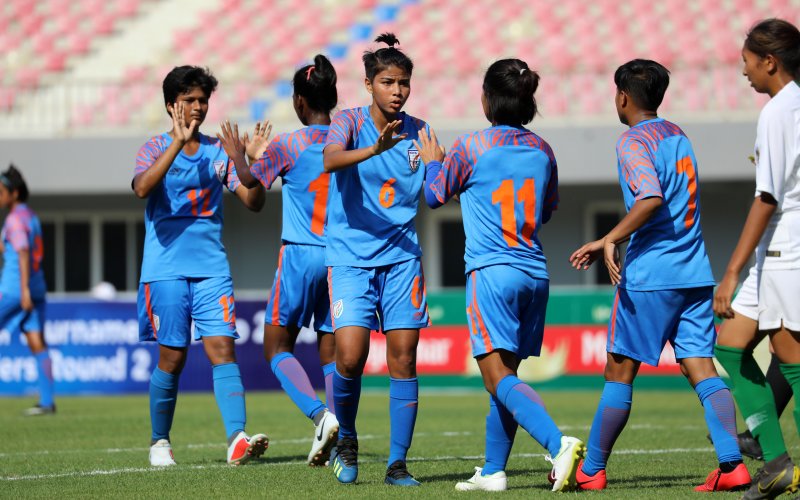 NEW DELHI: Dangmei Grace, prolific India Women's Senior National Team forward feels everyone in the team is a “star” in their own capacity and playing with these stars has made her really “proud.”

"After joining the National team as a professional player and especially after playing with the stars of the national team, I'm very proud and it has helped me grow as a player immensely. Aditi (Chauhan), Ashalata (Devi), Sangita (Basfore) and every one of this team is a star," Grace mentioned during the AIFF TV interaction on Sunday (December 27, 2020). "For me, it's a relief to join the team once again after the pandemic situation," she further added.

The forthcoming FIFA U-17 Women's World Cup and AFC Women's Asian Cup would be game-changers in terms of populating women's football in India and the tournaments will inspire the younger generation to take up football more seriously.

🗣️ @DangmeiG: I would like to request all the fans to focus on women's football and inspire our teams in the U-17 @FIFAWWC and the Women's @afcasiancup 🙌#BackTheBlue 💙 #ShePower 👧 #IndianFootball ⚽ pic.twitter.com/Een1eMZFJS

"We have hosted U-17 boy’s World Cup in India and we saw the amount of support across the nation. As a women’s team player in India, I would request everyone to give more focus on Indian Women’s football team as it would bring a lot of changes in the Indian Football history.”

"We are hosting two monumental tournaments in 2022. I think these (tournaments) will be an inspiration to the younger generation. I aspire to play my part in AFC Women's Asian Cup and face the top-ranking teams like Japan, Australia and others. I would be the luckiest person to represent my country at that stage and my family would be prouder ever," the nippy striker stated.

“The U-17 Women’s World cup will be a landmark in Indian football history. It will inspire the youngsters to play the game more seriously. It will be an inspiration for the parents too."

Grace stated that she's closer to Bala Devi and her professional career motivates her further. Bala has signed a professional contract with Scottish giant Rangers FC and she has written a new chapter in Indian football history when she scored against Motherwell LFC on December 6, 2020 to be the first Indian footballer to have scored a goal in a top-flight League in a European nation.

"Every player nurtures a dream to play abroad. Bala-di has been doing a tremendous job and it's an inspiration to the youngsters, not only me. Bala-di has shown the path that if we work hard, we can reach that level," Grace maintained.

Indian Football has moved forward together in recent times, especially women's football as the FIFA rankings have elevated to 53 from 67 in less than two years. The Manipuri forward mentioned that the exposure trips have played a significant part in improving the same.

"Two years ago, our ranking was 67 and now we have come up to 53 - that is a significant jump. All the exposure trips and the Hero Indian Women's League have been real contributors to this improvement," she continued, "As players, we have to improve in every department in strength, techniques and we have to keep ourselves physically fit."