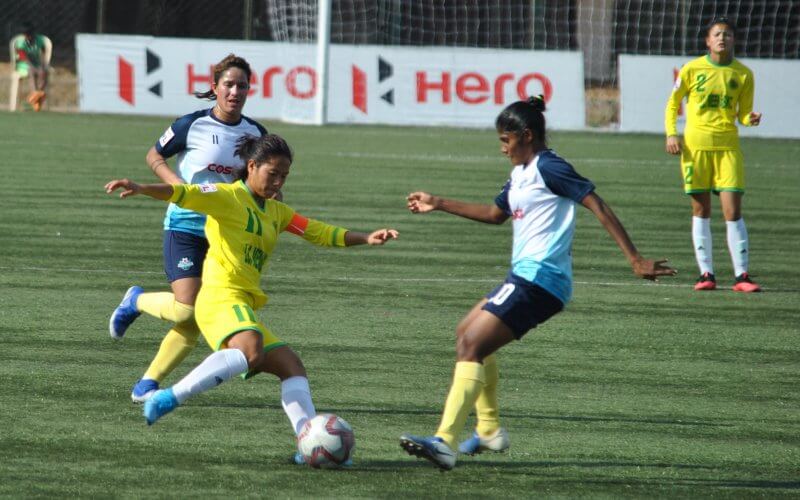 BENGALURU: All the four coaches of the Hero Indian Women's League 2019-20 semi-finalists including reigning champions Sethu FC hailed the 'team effort' before they face-off in the semi-finals, which are scheduled to be held at the Bangalore Football Stadium on Monday (February 10, 2020).

While Kenkre FC are slated to lock horns with the Manipuri outfit KRYPHSA FC in the first semi-final at 12 PM IST, defending champions Sethu FC will challenge red-hot Gokulam Kerala FC in the second semi-final at 3 PM IST. Both matches will be streamed live on Indian Football Team official Facebook page (https://www.facebook.com/TheIndianFootballTeam/).

KRYPHSA FC, led by the current AIFF young woman player of the year, Dangmei Grace, are the only team in the current season not to have conceded a single goal in the group stage while scoring 15 goals in five matches.

Ratanbala has already scored seven goals and her coordination with skipper Dangmei Grace and Anju Tamang, who has also netted 3 goals so far upfront has borne fruits for coach Chaoba Devi until now.

"Dangmei (Grace), Ratanbala (Devi) and Anju (Tamang) have been consistent but it's the entire team who have churned out the results so far. But, whatever we have done, is history now and we have to start from scratch against Kenkre and have to be very cautious," coach Chaoba Devi sounded cautious before taking on Kenkre in the semi-final.

On the other hand, Kenkre FC have had a mixed bag of results in the group stage. After the 1-10 drubbing at the hands of Gokulam Kerala, they came back strongly to register three back-to-back wins to cement the semi-final berth.

On being asked how tough will the semi-final against Kenkre be, coach Kalpana Dass said, "Our girls have been playing together for long and they have hit the right form at the right moment. We will give our best to continue the momentum."

Soumya Guguloth, having scored seven of their 13 goals in the group stage, led the Mumbai-based outfit from the front. On being asked whether the team is over-dependent on the youngster, Kalpana completely brushed aside those notions.

"A team consists of eleven players and other ten players are providing with perfect support to Soumya who is delivering upfront. It's a perfect synergy and everyone is equally important in the team's performance. Meanwhile, she was on the bench in our last match," Kalpana stressed.

One can surely expect a delightful goal-feast when the two top-scoring teams of the ongoing Hero Indian Women's League 2019-20 will face-off in the second semi-final at 3 PM on Monday (February 10, 2020).

Meanwhile, Gokulam Kerala won all five matches to advance to the semis whereas Sethu suffered a defeat against Kryphsa in the group stage.

"Our girls are confident and we have found the rhythm of late. Girls are enjoying the game,” Sethu FC coach Amrutha Aravind, added "We have quite a few youngsters in our team who are there in their own right. We, as a team, want to continue the form against Gokulam to proceed to the final."

Sandhiya, the attacking spearhead, who found the target 13 times so far, is behind Gokulam forward Sabitra Bhandari (16) at the top of the scoring charts.

Gokulam Kerala coach Priya PV highlighted her 'bench strength' who are also equally talented to break into the starting eleven. Sabitra Bhandari, the attacking spearhead, who hails from Nepal, has been in sublime form right now but the coach divided the credit amongst the entire Malabarian team.

"Undoubtedly Sabitra has been in top-notch form, but it's the entire team comprising of Kashmina, Kamala and others who have also been equally influential, churning out the results. Meanwhile, our bench is also equally strong and it's a good headache for me. It's the entire Gokulam Kerala FC contingent that has contributed equally to earn the results so far," Priya mentioned.