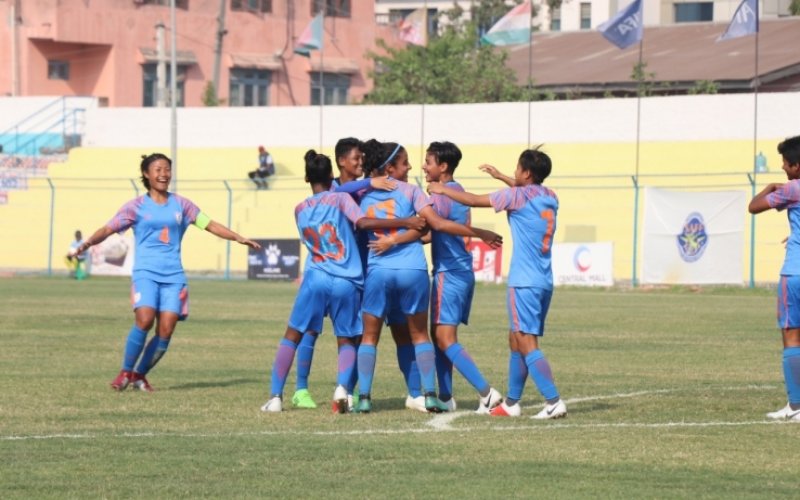 BIRATNAGAR (INDIA): The Indian women's team secured their berth in the final of the SAFF Women's Championship for the fifth time in a row with a clinical 4-0 win over Bangladesh on Wednesday (March 20, 2019) at the Sahid Rangashala Stadium in Biratnagar, Nepal. Dalima Chhibber opened the scoring for India, which was followed by a brace from Indumathi Kathiresan and an injury-time strike by Manisha, as the defending champions took their tally to 15 unopposed goals in three matches.

The match began with both teams going hard from the first whistle as Bangladesh looked to make the most of their physical prowess and pressed the Indian defenders with rigorous pace. The Indian centre-back duo of Ashalata and Sweety Devi, however, stood tall and denied the opposition forwards any sniff at goal.

After a tense start, the Indian eves found the foothold they wanted with their first corner of the match. With 18 minutes gone, Sanju curled in an excellent delivery from the left that fell to Dalima inside the box and the right-back made no mistake as she placed the ball into the back of the net.

The tempo of the match went up a notch after the opener, with both sides fashioning good chances to score. Bangladesh centre-back Mosammat Khatun skied an effort from close range while Sanju was denied by the custodian in a one-on-one situation in quick succession.

India registered their second in the 23rd minute through midfielder Indumathi, who showed excellent composure to slot the ball past the keeper after being played through on goal with a delightful reverse through-ball from Sanju.

Bangladesh then looked to hit back, trying their luck from distance - only to be denied by a confident Aditi Chauhan in goal. India, who scored 11 goals in their first two matches at the tournament, showed how clinical they can be with a classic counter-attack goal in the 37th minute to take their lead to three goals.

Dalima played the ball out from the right after an attack from Bangladesh and in no time, Sanju and Sandhiya combined excellently to put through Indumathi once again, who found the net once again with a well-placed finish.

As the sides switched ends for the second half, it was India that started out stronger and controlled most of the possession. Sanju and Dangmei Grace were a handful for the Bangladesh defence down the flanks and it was the latter who came close to scoring at the hour mark but saw her shot across goal go inches wide of the post.

Coach Maymol Rocky brought on Anju Tamang and Manisha in place of Ratanbala Devi and Grace respectively, and both substitutes produced impactful performances as soon as they came on. With 15 minutes to go, Anju ran in goal and looked to chip the keeper with a volleyed effort but it sailed just over the bar.

Manisha too was a handful for the Bangladesh defence after coming on and almost gave India their fourth goal with a shot from inside the box that was saved excellently by the rival custodian. However, she was not to be denied in the dying moments of the match as she pounced on a loose ball in the box, rounded the keeper and scored her first goal of the tournament.