Women Football
Celebrating special bonding on and off the pitch 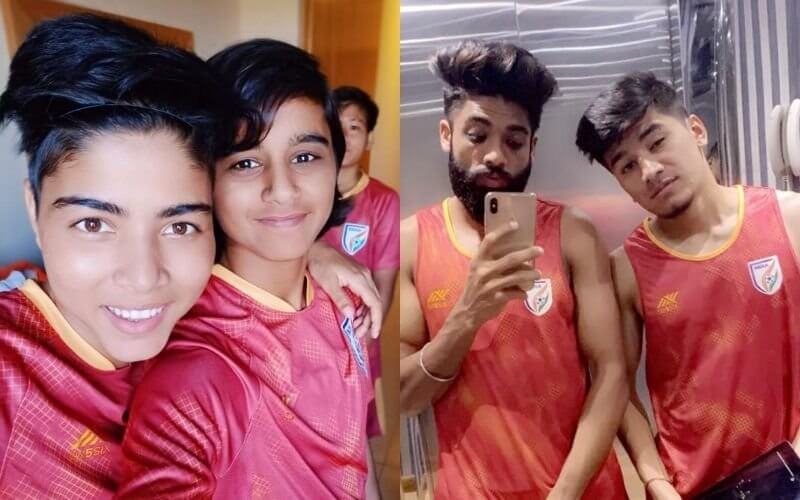 Anirudh Thapa and Germanpreet Singh, both Blue Tigers, football has been the bonding factor. The best of buddies, quite inseparable – the Thapa-German duo, as they are often called have been playing in the same side ever since their days in the U-19 National Team.

They went on to progress through the ranks together through to the U-22 side together as well. In the midst of this, the duo also signed for the same clubs -- first Minerva Punjab, and then Chennaiyin FC. Hence, when they finally made their way to the senior National Team together, it was easier for them to integrate.

"German had been called up to the Senior National Team camps a couple of times before I was. So when I went for my first camp, German, along with a few other guys from the U-23 team were there, and that really helped," Thapa said to the-aiff.com.

On behalf of the #IndianFootball ⚽ community, we wish you all a Happy #FriendshipDay2020 👥 . Tag your best friend in the comments below, and leave a message for them ✍️ . #BackTheBlue 💙

"When you're a young player going to the National Team for the first time, you tend to be a bit awed by all the other big names around you. So having someone familiar like German really helped," he informed.

In fact, both Thapa and Germanpreet are roommates, every time they are in the squad together.

"It's good to have Thapa as a roommate. We are both fun-loving guys, so we tend to joke around a lot with each other. The seniors also have their own banter going on, but we juniors mostly tend to pick on each other," said Germanpreet.

In fact, both Thapa and Germanpreet have acquired one particular target over the years -- someone with whom they have developed a great camaraderie with.

"We both love irritating (Vishal)," German, as he is fondly called in the dressing room, said with a chuckle. "He's someone who ends up as the butt of our jokes quite often, but he takes things in the right spirit."

Another best-friend duo that exists in the realm of Indian Football is in the Senior Women's Team, where midfielder Sangita Basfore and winger Sanju Yadav have formed a good bond and understanding both on and off the pitch.

Much like the Thapa-German duo, Sangita and Sanju had also first met each other when they were playing for the India U-19 National Team. Now a central part of the Senior Women's Team, the ‘S-bonding’ often depend on each other to introspect on their respective games.

"We often sit together after a particular match after we've had our dinner, and discuss areas where we could have done better," said Sanju.

"These discussions often help us understand what move the other tends to make in a certain match situation. That way we can both anticipate each other's moves and play our passes accordingly. This helps us stay one step ahead of our opponents," she continued.

However, these talks between the two best friends continue even when one of them is not in the squad.

"During the South Asian Games last year, Sanju was not in the squad due to an injury, but I used to call her up after every match, and tell her about the game," said Sangita. "She would give me a range of advice and even asked me to talk to other teammates about what I expected of them in certain situations, or what they expect of me in the same manner. This has really helped us develop an understanding that goes beyond the pitch."

The Women's Team players are, however, not void of a few pranks of their own.

"I'm the one who generally does the pranks. Sanju is a bit more serious, and I often have to drag her along, to join me," laughed Sangita. "I remember once we had drained all the lotion from the bottle of one of the junior players, and replaced it with shampoo," she continued laughing.

While such pranks mean that one teammate ends up as the butt of the joke, they help to build a camaraderie that extends onto the pitch.

"It's very important to know the person alongside you on the pitch. At the end of the day, you both will be fighting for each other," said Thapa.

"If we have a good connection off the pitch, that on-pitch understanding also develops. It's very important to gel well and have a good time with your teammates as that helps you express yourself on the pitch."