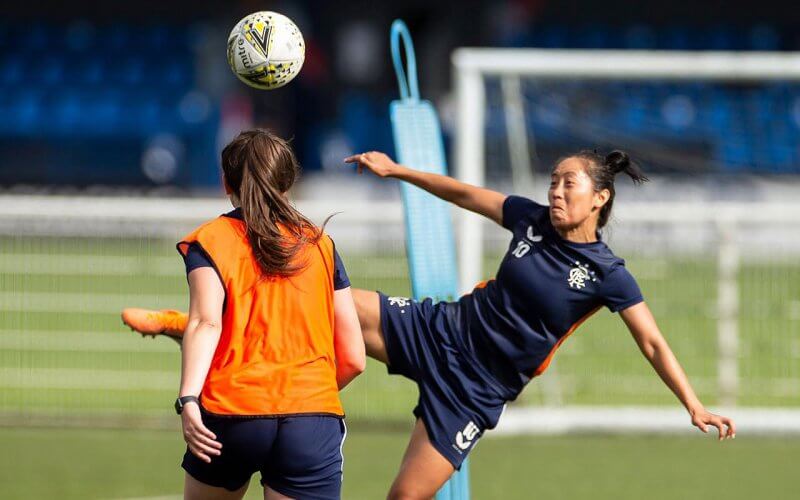 KOLKATA: The Indian football ecosystem has already started to move forward together with the Hero I-League Qualifier 2020 and Mohammedan Sporting already sealing a berth in the Hero I-League 2020-21. The Qualifier has been the first-ever sporting action in India organised by any sporting Federation since the lockdown.

Add to that -- around four-and-a-half thousand miles away, another Indian has just hit the pitch.

Indian Women’s National Team forward Bala Devi had decided to stay back in Glasgow, Scotland during the worldwide lockdown enforced by the COVID-19 Pandemic. Now, however, the 30-year-old is back on the field as the Scottish Women’s Premier League resumed on October 18, 2020.

Rangers Women FC got off to a flying start with a 5-1 victory over SWPL side Hearts on Sunday as Bala Devi also made her return to the pitch, coming on as a second-half substitute.

"It was really good to be back on the football pitch once again. Being away from the pitch for so many months is not a good feeling," Bala said to the-aiff.com.

"But all those months of hard work paid off, and we have now started off with a win but this is only the start of a long season ahead."

Bala had been training for the Rangers for around two months ahead of her first post-pandemic game against Hearts Women FC.

“I have been training with the team for about a couple of months now, and hopefully we will be physically ready to go once the league starts,” Bala said.

“Of course, our team gave us our fitness programmes, which was optional for us to follow when the pandemic struck. But I made it a point to follow the training modules given to me,” said Bala. “The workouts I could do at home, I did indoors. I found a park near my home here in Glasgow, and did most of my training there, when it was safe to go out. Since there was a lot of open space I was also able to do some running, and that felt good.”

Such was her determination to keep her mind within the realm of the ‘Beautiful Game’ that she doubled up her training efforts by joining her teammates from the Indian Women’s Team to train together online.

“It was fun to get together with my buddies from the National Team and train with them over video conferencing. It’s not something that I have done often. But this is one of the things that has developed because of the lockdown,” she continued.

However, it has not always been an easy time at her new home in the British Isles. Moving to a new country where one does not know as many people takes its toll.

“The first month I was feeling quite lonely because all the other players went home as they were from nearby areas -- or at least from somewhere in the UK or the neighbouring countries. It was just a few others and myself that actually stayed back,” said Bala.

“But I kept in touch with everyone and that helped. The coaches also took good care of me. They even took me out shopping once the lockdown was over. These are very small things in the larger scheme of things, but they do help lighten your spirits,” she continued.

“I’ve been in this set frame of mind since May. All I’ve thought about is how to work on my fitness. I repeatedly kept thinking that I should not have any physical issues once we actually start playing football,” she averred. “From as far back as I can remember, this really was the longest period I spent away from the pitch, and I’m just glad that this phase is over now.”

The mercurial India striker feels that the months she spent in self-isolation gave her a new perspective on how to do things.

“That time really taught me how we should be ready for different situations in life. We never know what may happen. A few years back, I would have laughed if anyone had told me that all major global activities would come to a standstill for a few months. But that is what happened,” she said.

“We should all be ready to adjust ourselves according to the problems that life throws at us. If we are flexible, we can manoeuvre our way through anything. Take everything into your stride and be the best that you can in any given situation.”

Women Football Running on the lush green pitch is what everyone i...