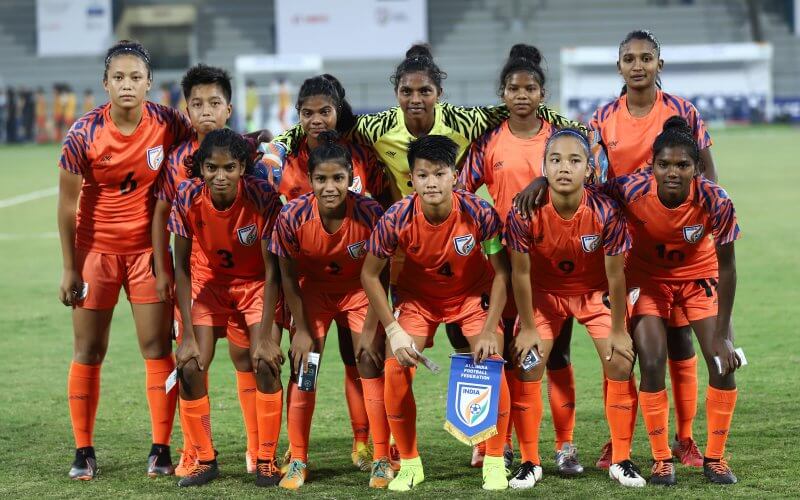 NEW DELHI: In an interaction with the India U-17 women's national team on Tuesday (December 1, 2020), All India Football Federation (AIFF) President Mr. Praful Patel and Union Sports Minister Sh. Kiren Rijiju laid down the future pathway for the players, starting from the FIFA U-20 Women's World Cup 2022 qualification campaign to the FIFA Women's World Cup 2027.

The players shared their thoughts after the interaction, stating that they felt 'motivated' and 'encouraged' after hearing the President and Hon'ble Sports Minister's words, which included the formation of an Indian Arrows team for women that will compete in the Hero Indian Women's League (IWL).

Forward Daisy Crasto said, "After interacting with AIFF President Praful Patel-sir and Sports Minister Kiren Rijiju-sir, I felt really motivated and encouraged. I was very excited when sir told that an Indian Arrows team will be formed because it is a great opportunity for all the players as we will be playing against the best teams in India. The most important thing is that we will learn new things and continue improving ourselves."

Earlier, the FIFA U-17 Women's World Cup India was rescheduled for 2022 and consequently, a number of players from the current squad will be ineligible for the mega-event due to the age factor. However, with the federation's commitment towards the long-term development of the women's game, the players mentioned that they feel 'assured' after seeing the roadmap for them.

"I felt extremely honoured to be able to interact with Praful Patel-sir and Kiren Rijiju-sir. They motivated and encouraged us a lot and showed a lot of support to us which was great. The roadmap given for us as players is very assuring as it shows us how much effort the federation, government and Sports Authority of India is putting towards us and the development of women’s football as a whole.

It is also exciting for us as players to be able to get the best opportunities to prepare for the qualification of major events like the Asian Games and FIFA World Cup," midfielder Aveka Singh said.

According to forward Sai Sankhe, the fact that there is a 'solid plan' is a major motivation for the team and added that the players feel energized after the announcement.

She averred, "It was really motivating and assuring to hear that we are fully supported by the federation and the government. It was also wonderful to know that there is a solid plan for our future. I definitely feel energized that I have something to work towards, which really encourages and motivates me to do my best."

2022 is poised to be a watershed year for women's football in India, with the FIFA U-17 Women's World Cup set to take place in the country along with the AFC Women's Asian Cup. The latter is a step on the roadmap for the current U-17 crop, with a number of players expected to take the step up for the senior team for the continental event.

Winger Sumati Kumari stated that the prospect of playing for the senior women's team is 'dream-like' and said that the discussion on the roadmap has taught her the value of staying positive and moving forward together.

"It felt very good to speak with Praful Patel-sir and Kiren Rijiju-sir. After the initial disappointment, the announcement makes me feel proud and has reinvigorated the whole team. I hope to give my best when we play the qualifiers for the FIFA U-20 Women's World Cup and being selected for the senior team and playing in the AFC Women's Asian Cup at home will be like a dream come true," she stated.