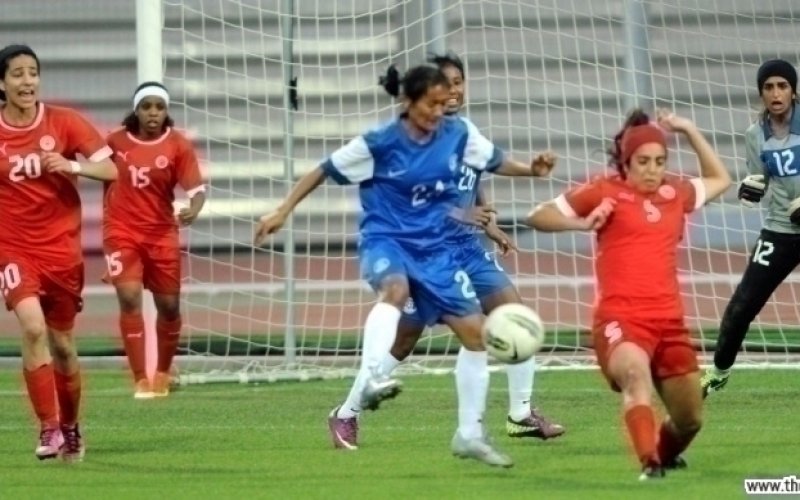 MANAMA: Kamala Devi has been enjoying a purple patch.

The India Women’s Team Striker who can also play in the middle of the Park was adjudged the Woman of the Match in the 2012 SAFF Championships in Sri Lanka. Thereafter, she was brilliant in the two Exhibition matches against the combined Women’s Team from The Netherlands.

Hence, it came as no surprise when she sparkled in Bahrain scoring two outstanding goals in both the International Friendlies played against the Island Country.

If her being at the right place at the right time was commendable in the first match when she poked home a brilliant cross from Sasmita Malik, her 71st minute screamer in the second match was a ‘Classic’ as Goalkeeping Coach Chitra Gangadharan termed it later.

But trust Kamala, and her real test of skill begins now.

“I am thankful to the Almighty. I want to keep working hard and continue in the same fashion. It was the best moment of my career when I got the Woman of the Match award last year in Colombo. I had scored five goals in the tournament (SAFF Championships 2012). But my real test begins now,” Kamala quips.

“The Quality in the AFC Challenge Cup is far superior than the SAFF Championship. Whether I can maintain my form against top Asian teams like Chinese Taipei and Myanmar stays the big question,” she added.

In the first match, Kamala partnered Oinam Bembem Devi in the midfield. She was played as a Striker with Bala Devi in the second encounter against Bahrain.

Asked about her new dual role, Kamala said: “I am enjoying it. I have dropped deep as a Striker previously and I am comfortable playing as the attacking midfielder too. I like to create space and as long as I am doing that I am happy.”

The 21-year old Manipuri attributed her success at the International level to the ‘Football Culture’ prevalent in her state.

“Football is everywhere in Manipur. Not only boys, but even girls are equally encouraged to play football and take it up as a profession,” she informed. “We have a proper Club football structure thus all are playing almost throughout the year. I play for Bihar now but all these years I played my football in Clubs of Manipur,” she added.

“It’s because of the Football Culture in Manipur that what I am today. Bembem Di (Oinam Bembem Devi) is the best example,” she reflected.

You could never doubt what she said.

Women Football Forwards together: Incredible to learn from Bala-d...